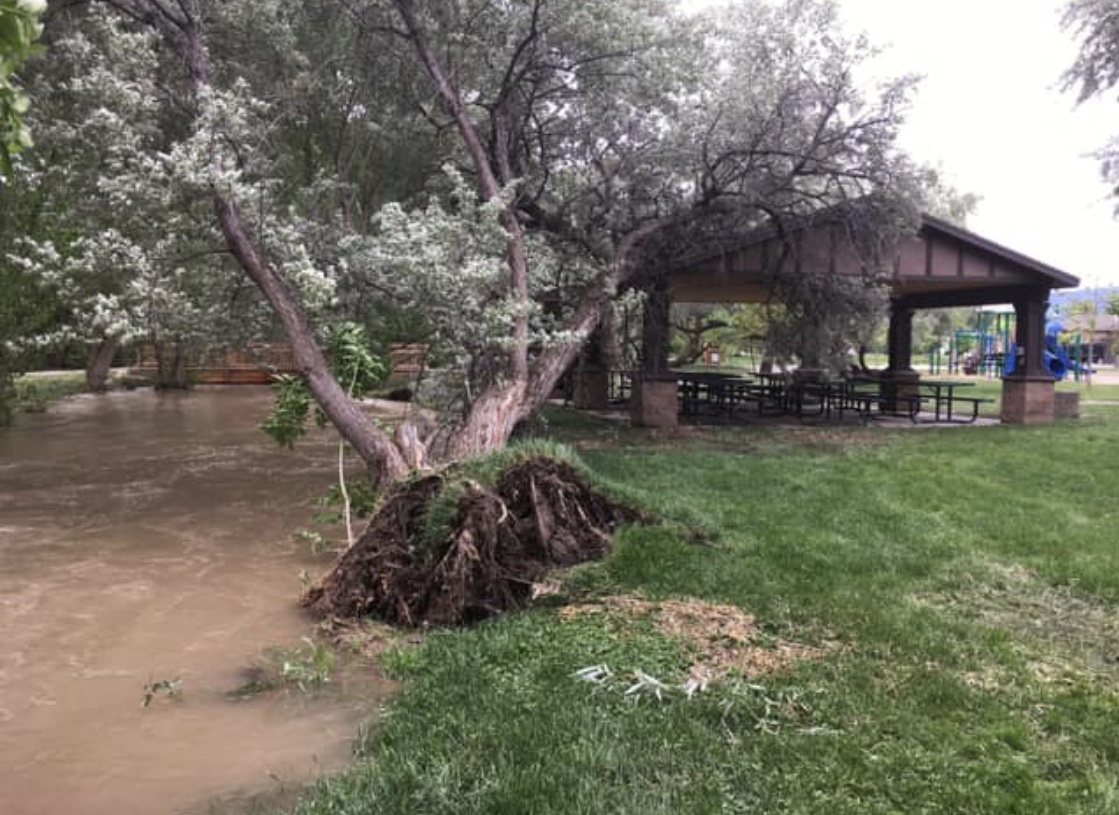 Officials warn residents to stay out of areas with flooding

Lehi City crews worked over the weekend, carefully monitoring high water flows and cleaning out debris in the waste ditch bridges, screens and grates, and around Dry Creek to avoid flooding. The area around Lehi Elementary School and surrounding neighborhoods were most at risk.

According to Wade Allred, Lehi City Streets Director, “We had the highest water levels on Friday night–the highest since 2010. The new muscle wall (700 feet of a water-filled flood barrier) kept all the water in the channel and helped us avoid what in the past had been a guaranteed flood issue. Debris continues to be our biggest challenge.”

High winds over the weekend contributed to the problem of limbs and branches being swept into the waste ditch and Dry Creek. “We will take advantage of this week of lower water levels to clear and haul away debris, check for bank failures in both ditches, and check for man-made obstructions. Crews will also be removing trees that may have been damaged by the wind and as a result, have weakened our [ditch] banks,” said Wade.

“If temperatures reach 87 degrees this week, we could see even higher levels of water. All departments, including public works and public safety, are on deck to help out if flooding again becomes an issue,” said Cameron Boyle, Assistant City Administrator. Volunteers filled 10,000 sandbags over the past few weeks, and more bags will be filled. City crews will be available to help residents place sandbags and determine the best places to stack them. Sandbags are available for pickup at 439 W. 300 North or by calling Lehi City.

Higher than normal snow levels this winter and cooler than normal weather has kept the snowpack in the mountains high and there has not been the normal gradual melting of snow, according to Allred.  If rise temperatures rise close to the 90-degree mark and beyond, the snowpack at low, mid and high levels will all melt at the same time and the water flow will be more than the waste ditch and Dry Creek can handle. Ideally, if the weather stays in the ’80s for the next few weeks, the lower levels of snow will melt first, with the mid and high levels melting gradually as temperatures rise.

Over the weekend, residents saw waters flooding into Dry Creek Park and through the parking lot and playground at Lehi Elementary School. “Both of these areas are designed to be detention areas for flood waters to prevent issues further downstream. They are intended to fill as water levels increase,” according to a Lehi City social media post.

City officials and the Lehi Fire Department have warned residents repeatedly to stay out of the water at the Lehi Elementary playground and the Dry Creek Park and to stay off the bridges, creeks, and ditches. Updates of flooding are posted on the Lehi City Facebook page. For flooding concerns call the city at 801-836-1072. Sign up for alerts at alerts.utah county.gov.