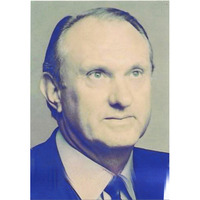 Mason Bradley Sharpe Jr. of Lehi, Utah passed away peacefully at his home on Monday, November 4, 2019.

There will be private Graveside Service for the family at the Lehi City Cemetery. Following this, there will be a celebration of his life held for all who wish to honor him at the LDS Stake Center Building, 851 North 1200 East, Lehi, Utah on Saturday, November 9, 2019, starting at 2:00 PM.

Mason was born and raised in Charlotte, North Carolina. He joined the United States Army during the Korean War. When he returned from Korea, he was stationed at Dugway Proving Ground. While he was stationed there, he met Doreen Clark of Lehi, Utah. They were married in 1956 in Lehi, Utah.

He was a career military man and served honorably in the United States Army until his retirement. Mason was a highly decorated veteran of the Korean War, and also the Vietnam War. He was a lifetime member of the Disabled American Veterans and the Veterans of Foreign Wars.

He is survived by his wife Doreen, daughters; Kathy and Joni, his son Tony, as well as many grandchildren and great-grandchildren.