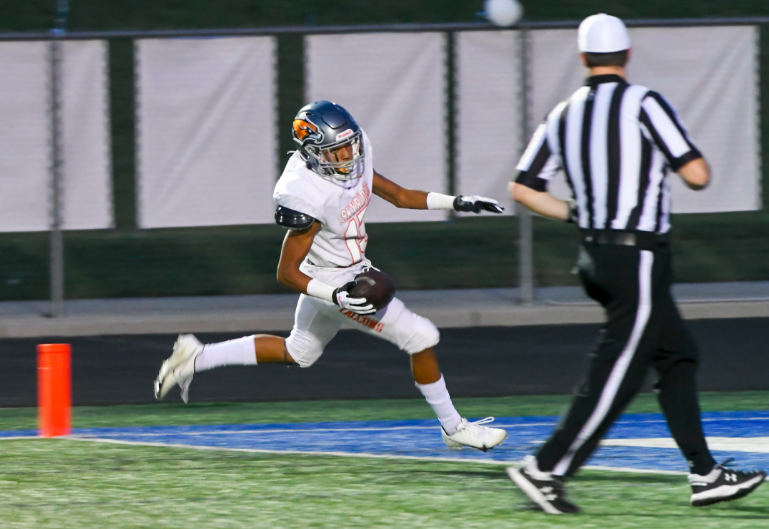 In their second league game in the always competitive Region 4, the Skyridge football team continued their dominating play with a convincing 35-7 win on the road at Pleasant Grove.

The Falcons scored 20 points in the first quarter and 15 more in the second. Sophomore cornerback Smith Snowden had a 37-yard interception return for a touchdown and sophomore quarterback McCae Hllstead threw two touchdown passes, both to senior wide receiver James Palmer.

Hillstead finished with 11-of-19 completions for 189 yards. Palmer had three catches for 77 yards. Junior running back Jeter Fenton rushed 17 times for 84 yards and a touchdown.

Skyridge Head Coach Jon Lehman said, “Offensively we really handled some of the different looks that they gave us very well in the first half. We put together some really nice, consistent long drives.

“Defensively up front, we were really strong against the run. The defensive backfield just made some big plays. We had three takeaways in the first half which obviously was the difference in the game,” he added.

The methodical offensive play of the Falcons contributed to the win. Hillstead put points on the board first for Skyridge with a three-yard run into the end zone.

Palmer quickly followed up with a 64-yard catch and run for the second touchdown and Snowden then electrified the field with a pick-six down the sideline to build a three-score advantage in the first period of the game.

Quarter 2 included a Skyridge offensive line that was rock solid and protected Hillstead. Fenton plunged across the line from two yards out for a touchdown and Palmer scored one more time for a 35-0 halftime lead.

Snowden said, “We were playing ‘man’ and I was running with the Pleasant Grove receiver and I saw him break it down, so I broke down and I looked back at the quarterback and I caught the ball. I kept my eyes on the ball so I didn’t drop it and then took it to the house.”

The Falcon defense was as skilled as they were relentess in pressuring the Viking passing game, including notching five sacks of the Viking quarterback.

Snowden showed his development as a lockdown cornerback by registering his third and fourth interceptions on the season. Senior defensive end Peli Launoa proved to be an asset by recording three sacks on the night among his nine tackles. The defense only allowed a single touchdown in the game.

“This was a very hard, a very fast and physical game,” said Skyridge senior linebacker Colby Dulle. “The coaches came out with a great game plan and we came out tonight and executed almost perfectly. Pleasant Grove was very physical, big and powerful. Our defense shut them down and played really good tonight.”

Snowden said, “The Vikings played hard. We talked a lot about being physical tonight and that is exactly what we did, played physical. It was a good week of practice and we out-physicaled them. The whole team played really well.”

The Falcons remain undefeated at 7-0 and they maintain the 6A No. 1 RPI state ranking as they prepare to take on No. 6 Lone Peak.