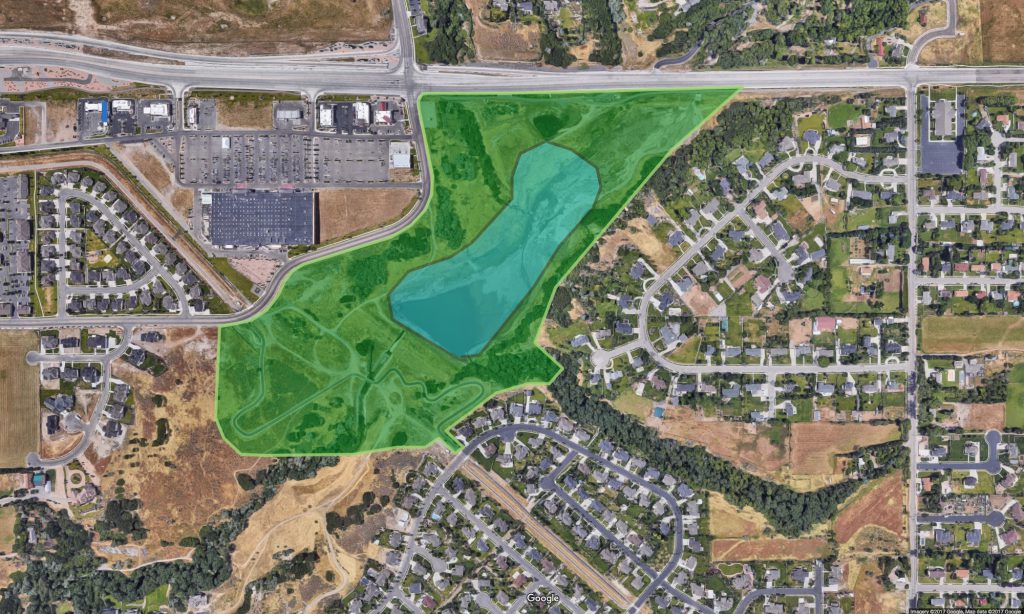 North Utah County residents hoping to go fishing and kayaking at Dry Creek Lake this summer will have to wait until 2022. Significant changes to the project’s design along with private donations that haven’t materialized have pushed the completion date at least a year into the future.

Dry Creek Lake, the reservoir project on the east side of Lehi near Smith’s Marketplace, consists of two undertakings; the basin excavation and dam reconstruction that has been going on for the past year, and beach and recreation elements. RB&G and WW Clyde have been general contractors for the excavation and reconstruction, scheduled to be completed in December 2020, but will now be done in April 2021.

“All the recreational elements are left to do. The initial design has evolved as the Mayor, City Council, and other parties involved have expanded concessions and watercraft rentals,” explained Trent Dyer, Parks Project Manager for Lehi City. The 2018 plan, which involved only a simple trail around the dam, now includes grass and beach areas, fishing, swimming, kayaking, and paddle boarding. “Our primary concern is with adequate parking while still providing great use areas,” Dyer continued.

The Parks Department has spent the last year trying to obtain funding and support for the lake. “When we do open, we want to have a robust facility that can support the anticipated heavy use,” said Dyer. Lehi City applied for and received a $150,000 grant from the Utah Office of Outdoor Recreation (UOOR) in April 2020 and significant grant money from the Utah County Tourism and Tax Advisory Board in December 2020. The city still has a long way to go, though, in funding the $4.5 million recreation portion of the park.

“We had a private donor who offered to give significant funding, but the company’s leadership changed, and Dry Creek Lake is no longer a priority for them. It might still happen, but we don’t know for sure,” said Dyer. He recently received an email from the UOOR that Dry Creek Lake was an ideal funding infusion project. Lehi City’s grant proposal received a lot of positive attention last year, and the UOOR is heavily involved in distributing money budgeted for state outdoor recreation. Part of Governor Cox’s proposed budget plan includes $100 million for outdoor recreation in the state.

The Lehi City Parks Department is currently creating a proposal for contractors to bid on the second half of the Dry Creek Lake project. “This is a high-profile job. It will be a competitive process,” said Dyer. The contractor who wins the bid will help complete the plans and execute the vision for the regional park.

“They can’t start working until the excavation job is finished in April 2021. With the expanding shortages of construction materials and labor, we’ve been told to anticipate no less than a six-to-eight-month construction window once they start,” said Dyer. “Hopefully, we won’t have any major delays or problems, and Dry Creek Lake can open in April 2022.”