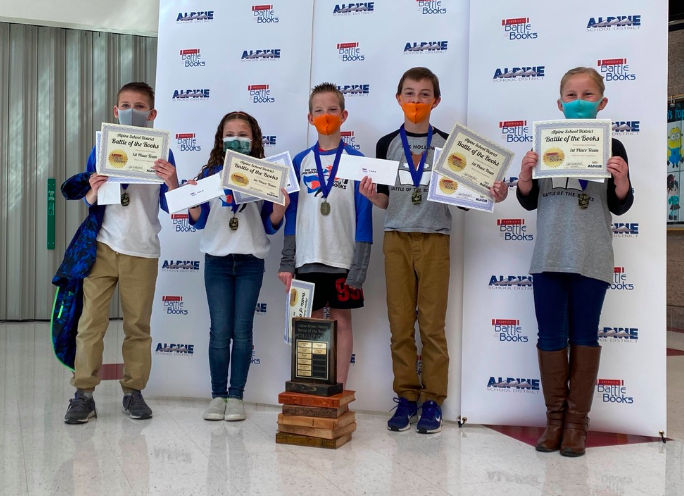 Five fifth grade students from Fox Hollow Elementary have been preparing for battle for months. They read 20 books, memorized the authors of those 20 books, quizzed each other in mock battles at home and came up with a devastating name for their team–“This Jelly Donut is Delicious.”

All the reading and training paid off for Bennett Adams, Emma Wangsguard, Zane Taylor, Ryan Brock and Grace McKay at the Alpine School District Battle of the Books on Saturday, March 27, when they won the top prize after six rounds of 24 questions each with 48 teams participating.

America’s Battle of the Books is a reading incentive program for third through 12th grades. There are a variety of ways to conduct battles, but official lists and questions come from the national organization. In ASD, schools have battles “Family Feud”-style between third and fourth grade teams of five as well as battles between fifth and sixth grade teams. The fifth and sixth grade teams from each participating school go to the district battle at American Fork Junior High. This year, 48 elementary schools in ASD participated in Battle of the Books.

“This is the most important time to get students interested in reading – if they don’t get excited now, it may never happen,” said Lori Nielsen, Department Secretary for ASD’s Instructional Media.

Fox Hollow Elementary had 220 kids from third, fourth, fifth and sixth grade participate in Battle of the Books this year. All the teams got breakfast from Chick-fil-A and everyone who read at least four books got a movie day in the library, which included all 220 students. “Because of COVID-19, we couldn’t really have a lot of group activities. All the teams had to prepare on their own time away from school,” said Torri Phillips, Media Specialist at Fox Hollow Elementary. Librarians and Media Specialists are in charge of each school’s Battle of the Books and it’s definitely not required of them, but many take on the extra work because of the positive impact it has on students and their desire to read.

The “This Jelly Donut is Delicious” team lost their first round at the district battle, but they didn’t let that bring them down. “When they reached the rounds where they could steal, they had one round where they just dominated and got a lot of points. It was amazing,” said Phillips, who coached the Fox Hollow team.

“We worked really hard before and during the battles and tried to stay focused for six rounds even with some really hard questions,” remembered Zane Taylor. In past years, parents and family could watch the teams battle in classrooms at American Fork Junior High, but because of COVID-19 restrictions, each team was only allowed one coach to observe.

“When we found out we won, I started jumping up and down, but inside I was in shock,” remembered Emma Wangsguard. She read almost all 20 books on the Battle of the Books list for fifth and sixth grade readers. Her favorite was “Mad Wolf’s Daughter” by Diane Meyers.

“My favorite book was ‘My Side of the Mountain’ by Jean Craighead George,” said Bennett Adams. “When I heard our team name called I felt excited and happy.”

“I felt surprised when they called our name. I didn’t think we would win because there were lots of other good teams,” added Ryan Brock. “My favorite book from the list was ‘Scared Stiff’ by Davis Roberts.”

“Battle of the Books was a very fun experience and I’m proud of my team for working so hard,” said Grace McKay.

Pioneer Book gave the winning team at the school level a $30 gift card to the bookstore and the district winners got another $30 gift card to spend on books at Pioneer Book in Provo. Fox Hollow Elementary Principal Shawn Brooks rewarded the team with jelly donuts. “Two of the team members don’t even like jelly donuts!” laughed Phillips. Principal Brooks made sure those two champion readers got the donut of their choice.