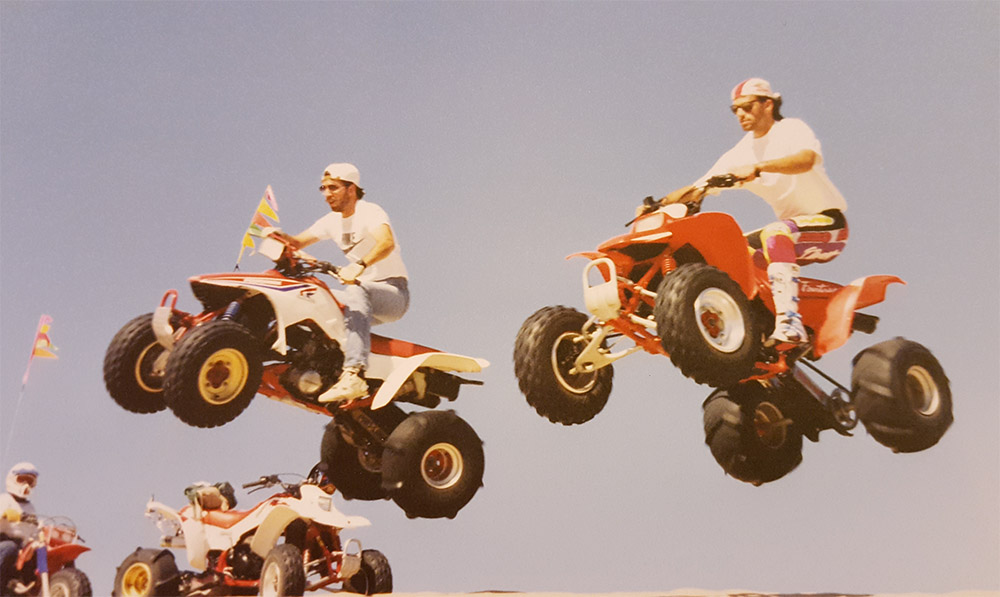 Christmas 1992. That’s when I found my reason. I was standing in my living room, staring at the two-inch gap in between the button and the hole on my new Kevlar motocross pants. I was thinking to myself, damn, they must have sent me 30” pants because I’m a 32” waist. As anyone would, I took off the pants and checked the label – huh, the label is wrong – it says 32”. Stupid company sent me mislabeled pants.

Christmas 1992. That was the day I was introduced to Kevlar – which doesn’t stretch. Apparently, my 32” denim Levis had just enough stretch to let me stuff my 34” waist into them. Apparently, marriage, a good job, a couple kids and a mortgage, agreed with me. Apparently, I was content. Content and chubby.

Christmas 1992. I found my reason and more importantly, my motivation. I decided to keep the 32” Kevlar pants. I decided to not be fat. I wasn’t fat last Christmas, I wouldn’t be fat next Christmas. Easy, right? I joined the millions of people who buy exercise equipment every January. I bought a Schwinn Airdyne exercise bike.

By summer I was in great shape. I could do anything physical, pretty much endlessly. That fall, for the first time in my life, I kept up with my brother, Randy, hiking the mountain to hunt deer. Randy ran marathons. I loved what being in shape was doing for me physically and mentally. There was just one problem. Those motocross pants still had a 2” gap between the button and the hole. It made no sense! I was a rock! I was exercising constantly! Yet, I weighed exactly the same as when I started. I rode harder, and longer, but that button never got closer to the hole.

Christmas 1993. One year later and that button hadn’t gone through the hole yet. Well, it had, but I can’t ride while holding my breath and sucking in my gut. Something had to give. I wasn’t willing to face 34” pants, and after a year of exercising it was time to rethink the fitness thing. It really didn’t take long to figure out what needed to change, but I’d hoped exercise would save me from the crushing truth that I could no longer eat all that I wanted. I HAD TO DIET. Diet, that’s one four letter word I’d never used. It really should start with an “F”.

New Year’s resolution, 1994: Lose weight. Having never dieted and having never eaten anything green in my life, I didn’t really know how to lose weight. I wasn’t about to start eating green things, so I stopped eating anything with fat in it. Peanut Butter and Jam sandwiches became Jam sandwiches. Chocolate Milk, stale Marshmallows and Chocolate Chip Cookies became water, stale Marshmallows and nothing. Ice Cream became my fantasy. I seriously thought I might die. Then something amazing happened. The button moved closer to the hole! In three weeks, I lost 10 pounds. I was absolutely stunned by the fact that what I couldn’t accomplish with a year of exercising could be accomplished in three weeks of eating less.

In the 20+ years since then, my reasons for exercise and diet have mostly been hunting and vanity. I still own those motocross pants. Sometimes they fit, sometimes they don’t. They continue to be good motivation when I need a kick in my fat butt. After 15 years of hard use, that first exercise bike finally broke enough that I couldn’t fix it and I replaced it with a Lifecycle recumbent exercise bike. I also figured out that I needed to add weight lifting to my routine – I really hate weight lifting.

Kennyisms: “Abs” are made in the kitchen