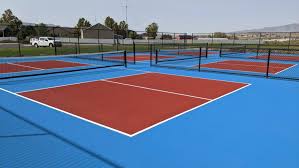 Pickleball is a quickly growing game that is easy to play, with social aspects that make it easy to love, however, the city of Lehi is behind the trend. Pickleball is one of the fastest growing sports in America with 4.2 million players reported in 2020.

According to USA Pickleball, from 2017-2020 pickleball grew in players by 34% in the United States. It has especially been apparent in Utah. In 2017, Fox News reported that “pickleball in Utah has more than doubled the number of players in the last few years.” And that was before the recent surge in popularity.

Why is pickleball growing so much? SportsImports.com says it’s because pickleball is ideal for all skill levels and ages, a healthy and social activity, and it is easy and inexpensive to create courts. Pickleball shows no signs of waning growth.

Hearing about the growth of pickleball as a sport and knowing that parks are important, you would probably think that cities would be building more pickleball courts to accommodate for the rise in players, and for the most part you would be correct. Cities all around Utah County have constructed quality pickleball courts, with lights, such as at Art Dye Park in American Fork and Harvey Park (finished in 2020) in Cedar Hills.

On the other hand, Lehi has come up short in providing pickleball courts for their citizens. I often find myself driving to other cities just to play pickleball. There has been an attempt by the city to provide pickleball courts, but it is a failing attempt. There are a total of 18 public pickleball courts in all of Lehi. Three at Olympic Park, three at Spring Creek Park, and 12 at Viewpoint Middle School. In 2015, Lehi released an updated park master plan, and, in that plan, they acknowledged that they need more parks than a regular city due to their unique demographics, so even though the NPRA suggests one pickleball or tennis court per every 2,000 people, Lehi’s goal is provide one for every 1,506 people.

According to the April 2020 census there are about 75,000 residents, so Lehi’s goal is to provide about 50courts. When you add in tennis courts, Lehi is closer to that number but still far off. Also, while the 12 courts at Viewpoint that were recently built may seem like a step in the right direction, they’re not all that useful. This is because during the school year they are almost entirely unusable as there is school going on during the day and the sun sets early so they can’t be used at night because there are no lights. And even though pickleball and tennis courts are counted together by the NPRA, they should not be since you cannot play pickleball on a tennis court and vice versa.

In addition to not having enough courts, the courts that Lehi has provided are subpar. This is because none of the courts have lights. So, outside of the summer, they can’t be used by the time most people get off of work and pickleball is a social activity, so people like to come in groups and having only three courts at a location leads to crowding.

One solution to fixing this would be repurposing sometennis courts as pickleball courts since you can fit up to four pickleball courts where one tennis court can fit. 16 People can be playing in that same area rather than two to four. Plus, the high schools already have manytennis courts. However, the easiest solution has already been handed to the city council and parks department; they just need to utilize it wisely. The citizens of Lehi passed Prop 7 which initiated a PARC tax so that Lehi can have more money for parks. They need to use this money to put in many pickleball courts and install lights so that the courts are more usable.