Vintage Vignette: She’s not my mother 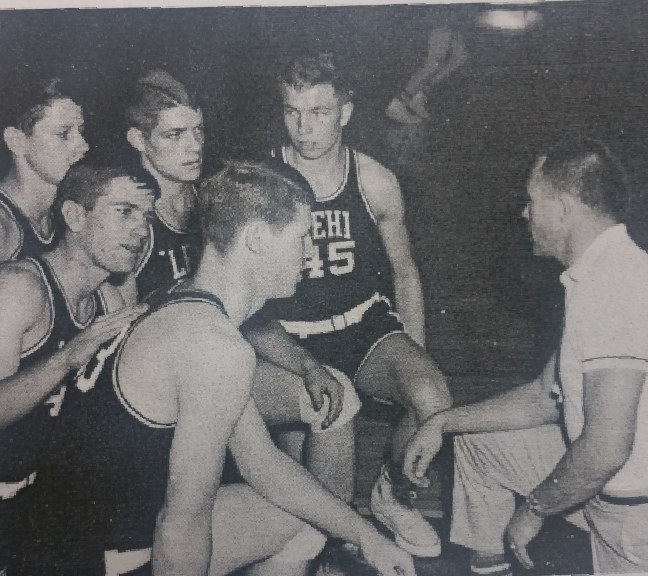 I planted my toe at the foul lane to cut off the opposing player who had a trickle of blood on his lip. We were old rivals but good friends. I smiled at him as the referee handed the ball to the Pleasant Grove shooter for his hard-earned free throws, then glanced up to see who was yelling at the top of her lungs at the poor official who had blown his whistle on me. It was my fourth foul.

I immediately recognized the screaming voice as that of my mom. She made brief eye contact with me and quickly threw her hand over her mouth. It might have been Eva’s hand…I wasn’t sure. Out of the corner of my eye, I could see dad sitting twenty yards away from mom staring blankly at the gym floor. Then, I heard Eva begin to yell at the referee and saw mom clamp a hand over Eva’s mouth. “HE NEVER TOUCHED HIM!” Eva screamed. “ARE YOU BLIND?” The piercing words were not in the form of a question but more an exclamation of fact that poor old referee “Pony” Brooks had to endure in the Lehi gym.

“Your mom sure is an avid fan” Principal Dale Price said diplomatically, on at least two occasions. “I can’t understand why she is not in the ward choir.” I just laughed and we both knew each basketball game in the Lehi gym would give the visiting refs a little heart-burn regardless of which team won. Through the years both mom (Betty Fowler) and Eva Oxborrow Johnson earned the name “Lehi’s Silver Foxes.” Someone from Lehi had given them that name because if someone from another town had given them nick names (which they probably did), it wouldn’t have been quite so flattering.

The Viking lad missed his first free throw and Eva yelled “You couldn’t hit the broad side of a barn with a shotgun!” Mom was still staring daggers at the ref and yelled just one octave above all students in the gym, “we know you hate Lehi, you idiot, and we know where you live!” Now that one got poor old Pony. He turned and looked up into the bleachers with a nervous grin on his face and a quivering lip muttering something about a technical foul. Then, he saw the large black purse at her side and wondered if it might contain brass knuckles.

I tried to ignore the continual barrage of insults and screaming comments directed to the referees. Then, here came a new one from Eva: “I’m gonna drive you home tonight ref, because you’re either drunk or blind!” That one must have really scared them. I glanced again at mom and she was actually laughing at Eva. The game ended and I don’t recall who won, but I saw mom running out the door of the gym with Eva. To watch mom run was very unusual. When I saw her running, I feared the worst.

Soon Pony Brooks was talking to a Lehi Policeman about some woman who had struck him in the head with a large black purse before disappearing into the night.

I saw him years later at the Pizza Factory in St. George. I approached him and asked if he was indeed “Pony” Brooks. “That’s me!” he said. “Who are you?” I told him I was from Lehi and I had seen him “ref” many games when I played in high school. He hesitated for a moment then said, “you know, I hated working in Lehi. There was a lady who called me all sorts of names and one night she actually hit me with her purse.” I started to laugh and told him I had a vague idea who it might be. I told him he had been a good official as he walked out the door shaking his head.

Thank goodness mom’s black purse never became evidence at the police station. I do recall that when I got home from the Pleasant Grove game that night, mom looked at me and we both had a good laugh.

Susan Says: How psychotherapy works to change your brain