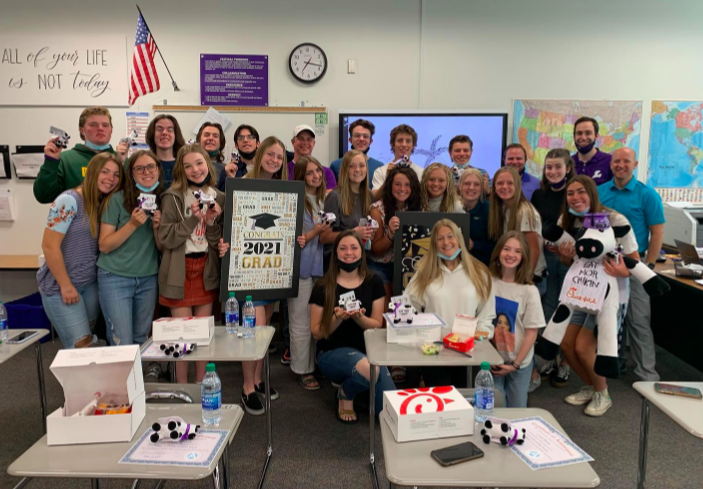 There is almost reverence in Dusty Pyne’s voice as he describes the mission and values of Chick-fil-A founder Truett Cathy. Pyne, who operates two local franchises of the famous vendor of all things chicken, quoted Cathy’s mission, “Glorify God by being a faithful steward of all we have been entrusted with and to have a positive influence on all who comes in contact with Chick-fil-A.”

Pyne began his association with the national franchise when he was just 24 years old, taking over a Chick-fil-A franchise in Boston. He was a recent graduate of North Carolina University and had earned a degree in Spanish and accounting. Pyne has Utah roots. He’s the son of Orem resident Vern Pyne and grandson of Cliff Pyne, a much-loved administrator for Alpine School District. Dusty’s father was involved in medical sales, which took the family to North Carolina.

When Dusty applied for a franchise in American Fork, he knew the process would be long and arduous. “Some people say it is easier to be hired by the CIA than be a Chick-fil-A franchisee,” quipped Pyne. “Only about 100 franchises are approved a year from 80,000 applications. So, a lot of marketing analysis goes into awarding franchises,” he continued.

Pyne was lavish in his praise of Truett Cathy. “They grew the business by taking care of customers. They are in the people business, not the restaurant business.” Cathy wrote a book describing the company’s philosophy titled, The Generosity Factor. “The book is more about the joy in giving when you don’t expect anything in return. There is no quid pro quo,” said Pyne.

“We try and follow this vision carefully at our two franchises, one in American Fork and one in Lehi. We want to be known as Utah’s most caring company,” said Pyne. However, when pressured to disclose how much food the company donates to local causes, Pyne was hesitant to answer. “We try not to turn anybody down.”

Recently, Brooklyn Trapp, a Lehi girl, was given a horse as part of the Make A Wish Foundation’s commitment to helping those affected by cancer. Local schools are also the beneficiaries of Chick-fil-A’s generosity. “We give over $100,000 worth of food a year away,” he revealed.

Pyne works with his father, Vern, the marketing director for the two local restaurants. “We hope we are pioneering the Chick-fil-A brand in this area and fulfilling the wishes of the Cathy family,” said Pyne. “We are not hyper-focused on the bottom line.”

Pyne is married to his wife, Crystal, and the father to three daughters, a 13-year-old and 11-year-old twins.