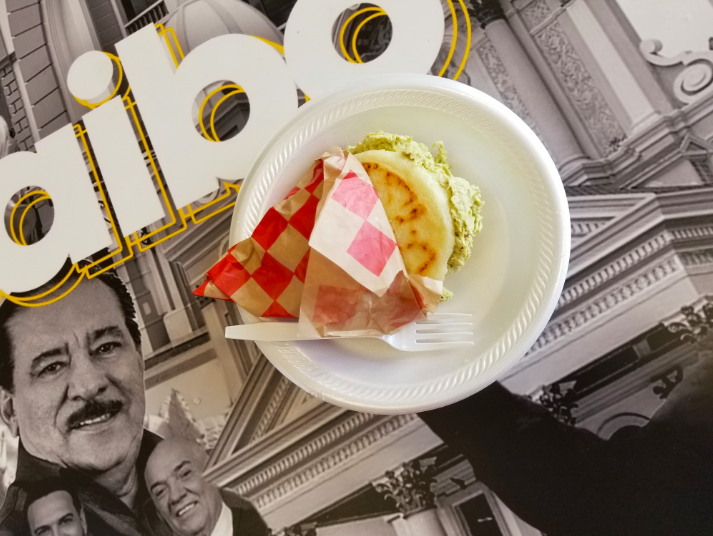 After only four months in business, the Venezuelan restaurant Zaperoco already has regulars. “That guy has been here every day for a week and orders the same thing,” said Laura Mazzey, offering the man a friendly wave. “I can’t remember names, but I remember faces and the food they order.”

Mazzey started selling empanadas from her home in 2019. “There’s a big community of Venezuelans here and on Saturdays and Sundays we wake up and want an empanada,” she explained. “Really, we can eat empanadas and arepas for every meal.”

When the space next to Macey’s, on East Main Street (785 E 200 S), became available earlier this year, Mazzey and her husband, Jhoan Paul, knew it was meant to be theirs. “Everything was just for us,” Mazzey remembered. “It was the perfect size; one wall was yellow, and one was blue already. All we had to do was paint the other wall red and we had the colors of the Venezuelan flag.”

Each of the tables at Zaperoco has the name of a city in Venezuela on it with images of people and places from the city. Many of the Mazzey’s customers served missions for The Church of Jesus Christ of Latter-day Saints in Venezuela. “We ask them what city they served in and then seat them at their city’s table. We want to bring back good memories,” said Laura.

In addition to empanadas, Zaperoco’s menu includes several arepas, a white corn cake that looks like pita bread, filled with meat or chicken. The Reina Pepiada Arepa, named after a Miss Universe from Venezuela, is shredded chicken with avocado, tomato and onions. Venezuelan-style burgers make American burgers look like sliders, with so many layers they’re served with forks, just in case. Plantains are a big item on the Zaperoco menu too.

Zaperoco has a small stage for karaoke on Friday nights and live music on Saturdays. “I chose the name Zaperoco because it means a jumble of things. We’re not just serving empanadas and fried food. Zaperoco is something exciting, like a party – for some it means disorder or chaos, but for me it’s something exciting.”

“Americans are very open and willing to try new foods. It’s not that way in Venezuela,” said Mazzey. “We have mostly American customers in Utah, and we love it.” Laura and Jhoan Paul visited Venezuelan restaurants in Florida during a recent trip and found that all the customers were Venezuelan.

“We want to make Venezuelan food as well-known as Mexican food here in America,” said Mazzey.