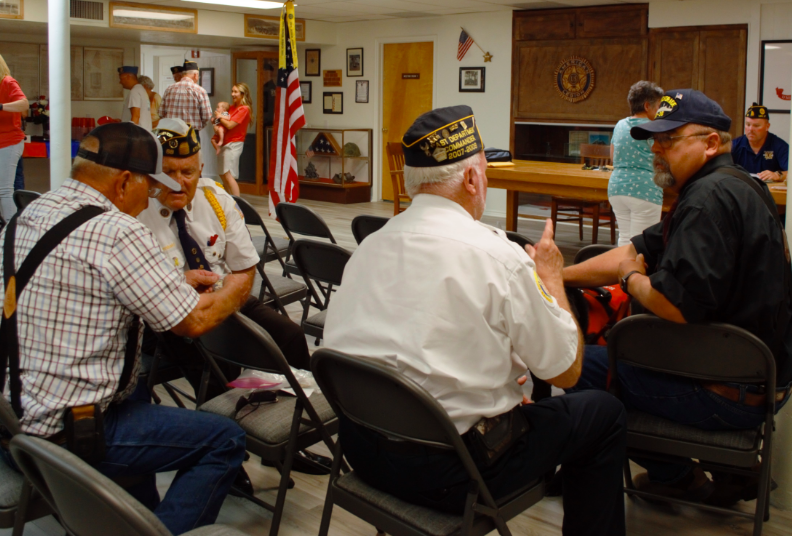 “I think we’ll be having a lot more activities here because of the new kitchen and game tables,” said Sheila Heindel. “We normally come down here and have our meeting and leave, but now we have a reason to stay awhile and visit.”

The members of American Legion Post 19 in Lehi have been meeting in the basement of Hutchings Museum for many years, making do with old chairs and no kitchen facilities. Post Commander Quin Allred took a call from Kate Terry at Ken Garff  Auto several weeks ago that started the ball rolling on some much-needed updates to the meeting place of Lehi’s veterans.

“Kate came and asked all of us what we would change if we could, and she got a lot of suggestions. A few days later she called me and said they were going to do it,” said Allred.

Kate Terry called veterans groups all over Utah looking for one Ken Garff Auto could serve. “She said I was the first one to answer the phone,” Allred remembered with a laugh.

In three days, a small army of 31 people from Ken Garff transformed the large meeting room with new floors, a fresh coat of paint, new padded folding chairs, a card game table, shuffleboard table, dart board, and new couches. “They had our photos professionally framed and they hung them up for us,” said Heindel. Each of the members of Post 19 donated a photo from their service in the Armed Forces to adorn the walls of their meeting room.

The biggest changes were in the kitchen. “They took out our 35-year-old appliances and replaced them with a new fridge, stove, toaster oven, hot drink maker and microwave. They installed a ventilation system so we can use it all, too,” Allred explained.

American Legion Post 19 has used the Hutchings Museum basement for their gatherings for decades on a one-dollar lease from the city. “It’s the veterans who built this building, let’s be frank,” said Mayor Johnson.

“This just tickled the heck out of all of us,” Allred said of the upgrades from Ken Garff.