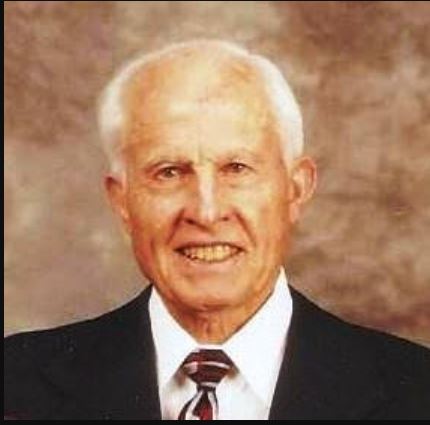 On July 9, 2020 our tall, dark and handsome father and grandfather passed away at the age of 100.  Vern was born on October 14, 1919 in Gooding, Idaho.  His family soon after moved to Texas where he graduated from Pharr, San Juan, Alamo High School in 1936.  Vern met his wife Ethel May Benson, while attending Warren Aeronautics School in Los Angeles and they were married on December 5, 1941.

During World War II he served as a Link Trainer in the US Army Air Corp.  Vern lived many years in Bakersfield, California where he worked for Marathon Oil Company as Process Foreman.  He was later transferred to Sidney, Nebraska.

Vern and May moved to Lehi, Utah in 1985 after serving a mission to Buenos Aires, Argentina.  Vern served faithfully in the Church of Jesus Christ of Latter-day Saints and touched the lives of many people.

All who knew Vern were influenced and blessed by his wisdom, kindness and love.  May said,”You can always count on Vern to do the right thing.”  He was always a great example to his family and friends and will be dearly missed.

A private family service and burial was held at the Lehi City Cemetery.