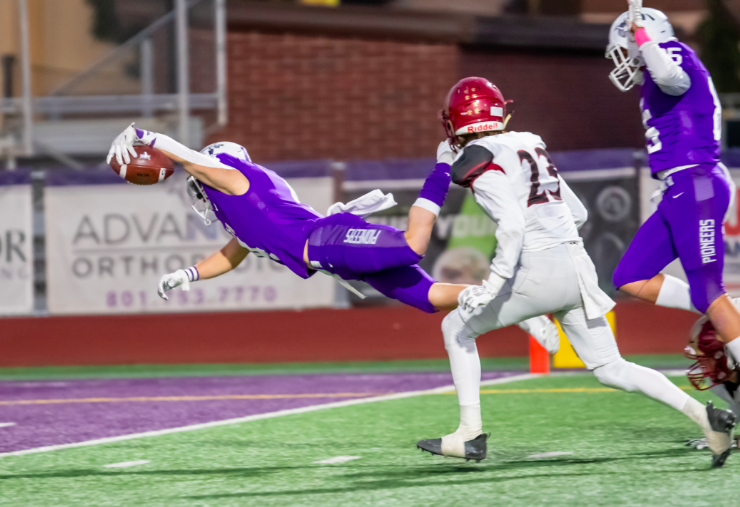 The Lehi football team created an unusual scoring opportunity very early in the first-round playoff game against Viewmont and the rout was on from there as the No. 12 Pioneers blitzed the No. 21 Vikings 52-14 at home on Oct. 23.

The coin toss went to Lehi and the Pioneers elected to defer, so the visitors got the ball first. However, they kept getting pushed back by the Lehi defense and threw an incomplete pass on 3rd and 18 deep in their own territory.

The subsequent punt was blocked by senior defensive back Bode Hinckley and senior linebacker Carson Gwilliam scooped up the ball and sprinted the remaining three yards to the end zone to put the home squad on the board just 1:09 into the game. The PAT was missed to leave the score at 6-0.

During the next Pioneer possession, the Vikings intercepted at the 24-yard line but again went 3-and-out. Sophomore Kadiyon Sweat took the ball on the bounce and broke another big return to set his team up inside Viewmont territory at the 46-yard line.

The drive featured a big run by senior quarterback Creyton Cooper and a nice reception by senior wide receiver Grady Gonzalez to reach the red zone. Senior running back Takeshi Faupula got the call for the 9-yard rushing touchdown.

Lehi elected to go for the 2-point conversion and Cooper found junior wide receiver Isaac Dayley in the end zone to boost the score to 14-0 with 5:10 left in the period.

The Pioneers got the ball back again before the end of the quarter and marched down the field once more. Senior Isaiah Tauai collected a 9-yard pass for the score with 1:37 remaining on the clock and junior kicker Zane Goodrich hit the PAT to give the hosts a 21-0 advantage.

Early in the second period, sophomore defensive back Nathan Anderegg intercepted a Viking pass and returned it 15 yards to the Viewmont 45. However, the drive ended with a pick in the end zone.

Viewmont was once again unable to capitalize after another Lehi turnover, this time a fumble. The Pioneer defense forced the Vikings to give the ball back after a failed fourth down with 17 seconds remaining.

Faupula turned a short pass into a 68-yard touchdown play as time expired for his third touchdown of the evening. The PAT made it 35-0 as the teams headed to the locker room. Faupula finished with 135 receiving yards and 55 rushing yards for 190 total.

The Pioneers scored twice more in the third quarter on a 2-yard Cooper run and a 25-yard scramble by senior running back Peyton Dieters. Sophomore Hank Griffin added a 24-yard field goal in the fourth period to complete Lehi’s tally for the contest.

Viewmont scored twice against the Pioneer reserves in the final quarter but the victory had been secured long before then.

“I thought our defense was good today since we stopped them so often,” said Coach Ed Larson. “Overall, the special teams did a good job, but we had a few breakdowns which didn’t hurt us in this game but they will if we don’t correct them. We’re going to shift some personnel around to try to address that.

“The score was nice but our offense needs to be better than what we were today,” he continued. “We still had three turnovers and that’s inexcusable. Our defensive line is getting better against the run game and the whole group overall played better.”

Larson expects Coach Steve Coburn to have his troops ready, and he does have some weapons. “He has his usual tough-nosed players, including three transfers from Hawaii who are really good.”

As a safety, Jarinn Kalama does a great job of covering receivers, but he’s also the team’s leading receiver with 52 catches for 665 yards and 11 touchdowns.

Tausili Akana is a big outside linebacker responsible for 26 tackles but he’s also a decent running back who averages 7.3 yards per carry and has scored twice.

They also have running back Chris Cook with 138 carries for 658 yds and 3 touchdowns. He’s had four games of 100+ yards. Quarterback Adarius Edwards has tallied almost 2,000 passing yards with 19 touchdowns and just four interceptions.

“They have good size up front on both sides of the ball,” Larson said. “Their defensive coach loves to blitz. It should be a good game for both teams.

“We need to be able to run the football and take care of the ball and not turn it over,” the coach added.  “If we play well we have a chance to get to the next round. We don’t need a miracle but we do need to be sound in all three phases of the game to have a chance.”