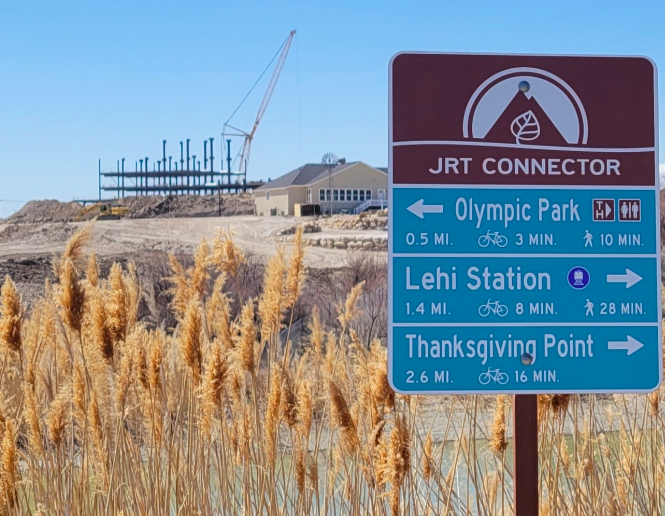 As a kid in Lehi, my dad took us fishing when he had time off from his job at the Geneva Steel plant. While Dad prefers trout fishing, he occasionally took us fishing down on the Jordan River. We used huge nightcrawlers caught the night before by flashlight in my grandfather’s well-irrigated garden for bait. We generally scored a string of catfish and grilled them over charcoal briquettes in our backyard. On one memorable occasion, I hooked a two or three-pound channel catfish close to the Jordan River Pump Station near the old Saratoga Springs Resort. The “cat” was a real fighter and landing him was tricky. With dad’s sage coaching, I prevailed, and that big catfish, along with a couple of smaller ones, fed our family that evening, including grandpa and grandma.

Leaving home for a new cycling adventure last week, I reminisced about old times on the river as I headed west on the Murdock Canal Trail towards the Jordan River Trail. I anticipated the natural beauty along the meandering riverbanks, hoping to see some anglers in pursuit of catfish. I stopped at a section of the Trail where a bike-pedestrian overpass will soon cross Timpanogos Highway. Straddling my bike, I contemplated a detour when a construction worker approached with a plate of warm chocolate chip cookies. I gratefully accepted one, chatted him up for a minute, then took advantage of the workers’ brief break to hustle past the construction. I am really excited about that new bridge!

Continuing west past Chick-fil-A and the Porsche-Audi dealership, I crossed the newly completed pedestrian-bicycle bridges over the I-15 ramps and under the busy freeway lanes. Talk about a significant safety upgrade! Continuing further west through Thanksgiving Point and over the FrontRunner tracks, I turned south past the Family Search building, then west again to the Murdock’s intersection with the Jordan River Parkway. From there, I could easily see the new Primary Children’s Hospital campus emerging just across the river.

The Jordan River Trail took me in a southerly direction, following the riverbank under the busy 2100 North corridor and then across 1500 North at the location of the original Jordan River truss bridge built in 1914. I pondered for a moment as I remember crossing that bridge regularly as a youth and the many memories it invokes. I don’t know what the future holds for the deteriorating structure, but I was glad to bike near it and enjoy that historic former Lehi passageway across the river.

The Trail between Thanksgiving Point and Utah Lake boasts some great views of majestic Mt. Timpanogos. At the time of my early-April adventure, the leaves were still a few weeks from emerging, producing the illusion of a mostly snow-covered “Timp” being closer than it actually is. A couple of watchful and curious “caballos” posed with beautiful Mt. Timpanogos as a perfect backdrop. Next time I’ll remember to bring them some apples.

I paused at the Remote-Control Airplane Park to watch hobbyists with their model aircraft practice take-offs and landings. I witnessed some daring aerial stunts and enjoyed several minutes talking to some of the “pilots.” The Trail runs right past the RC Park, where planes, helicopters and drones buzz overhead, and the distinct smell of nitromethane fuel permeates the air. Two happy enthusiasts showed me their aircraft as they disassembled and packed up to head home.

Just across Saratoga Road was a clear view of the iconic pump house at the headwaters of the Jordan River. “The Pumps,” as they are known, had their beginnings during extreme drought conditions over 120 years ago. The idea was to “lift” Utah Lake water into the Jordan River’s channel to flow naturally into Salt Lake County for irrigation purposes. Newer versions of the original pumps still perform that same function, except during rare times that Utah Lake is high enough to feed the river without them.

Take time this year to walk, jog or cycle the Jordan River Trail between Thanksgiving Point and Utah Lake. You’ll get away from the hustle and bustle of the city, encounter remarkable nature and see lots of happy people enjoying that beautiful Trail. I’m guessing you’ll still see a few folks in pursuit of those elusive Jordan River catfish.