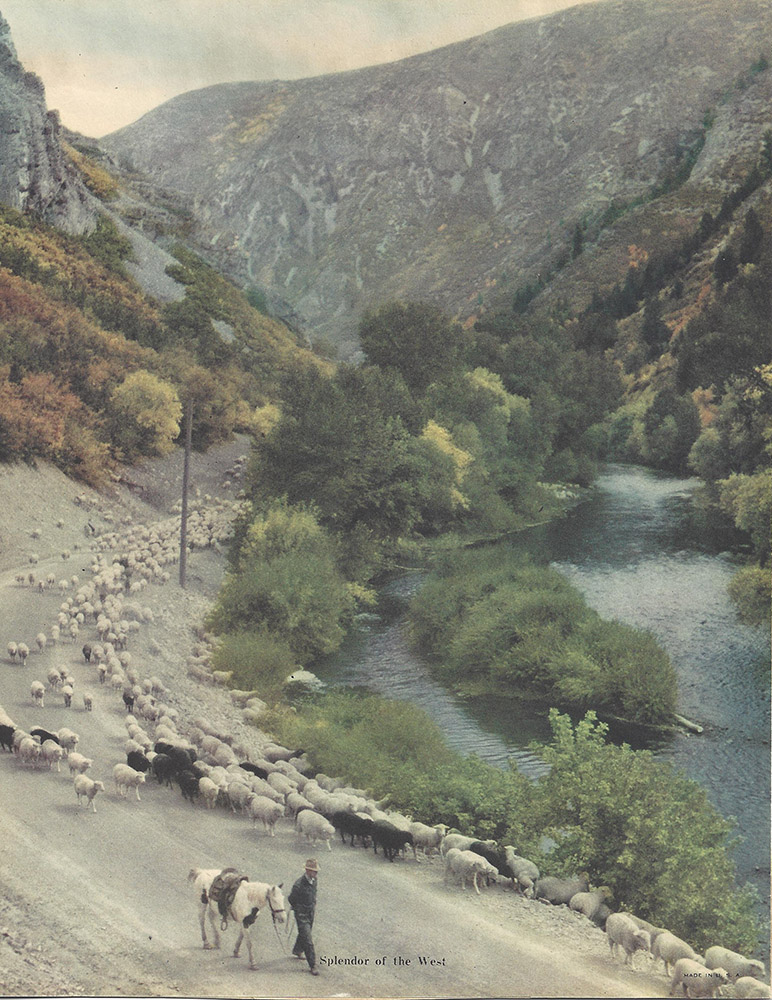 Ralph Davis’ long journey started in the Strawberry Valley, traveling down Daniels Canyon, Provo Canyon, then west to Lehi. The sheep were herded for twelve to fifteen miles per day and nibbled grass as they walked on their long trek. The sheep were bedded down each night.

In the 1920’s the Davis sheep business was started by Alphonso Davis, a prominent Lehi resident. He lived in a beautiful purplish, craftsman style house across from Wines Park. The business was passed to his son, Ralph. Their sheep business was a year-round affair with an estimated 5,000 sheep, dispersed to several locations.

According to Don Davis, son of Ralph Davis, “The business preferred purchasing Columbia ewes breeding stock from Wyoming. Suffolk/Hampshire mix bucks were used as a good genetic cross for lambs. The grown sheep had white bodies, with black face and black legs.”

The operation had about sixty horses, and about twelve sheep camps. Each herd generally required two herders, two horses, two dogs and a water tank truck pulling a sheep camp.

The grazing permits were acquired through the United States Forest Service, The Bureau of Land Management and some private grazing property. The permits were usually issued for so many head per acre, set-time length for grazing and for a fixed number of sheep per permit.  Davis went on to explain, “As time went on, the head count became less and less. It initially was 2,000 sheep per unit and dropped to 600 sheep per unit. When the federal government wanted to monitor the sheep count, the idiots would throw a hoop onto the range and count the sheep droppings.”

The Strawberry area permits were from June-September. The grazing ranges were south of the Strawberry Reservoir, down close to the town of Thistle.

Sometimes, Ralph’s wife Moselle, and daughter Marilyn, would stay in the sheep camp in Strawberry during the hot summer because it was cooler there.

Davis recounts a memorable story about his Dad. “While Dad was driving his truck up a steep grade in Oak Hollow, with all windows down in the summer heat, a bobcat jumped straight through the cab from one side to the other, zipping right past Dad’s face. Besides bobcats, there were mountain lions and in some areas wild pack dogs,” added Davis.

Another summer grazing range on private land was near Huntsville, Utah, in the north middle fork of Ogden Canyon.

Fish Springs was the West Desert winter grazing range. It extended to the Utah-Nevada border. The permit was procured through the federal government’s Taylor Grazing Act, a precursor to the Bureau of Land Management.

In the West Desert, it was common to have coyotes present. At night, the sheep herder would stay up all night. He would gather the sheep in a circle, settle them down for the night, and ride his horse slowly around the sheep to deter coyotes. He had a Winchester Rifle on his lap and a kerosene lantern resting on the horse’s rump, behind the saddle.

Davis talked about the importance of sheep to the family. “One day, Dad came home driving a brand-new Lincoln Continental. He pulled into the driveway. Mom got out looking a little disgusted. Dad opened the backseat of the shiny new car. A huge buck sheep jumped out. Dad had stopped at the auction on his way home and purchased the sheep. Mom protested the acquisition, “how are you going to get him home,” she said. “In the back seat of the car. Who do you think paid for it,” Davis explained. Not another word was said.