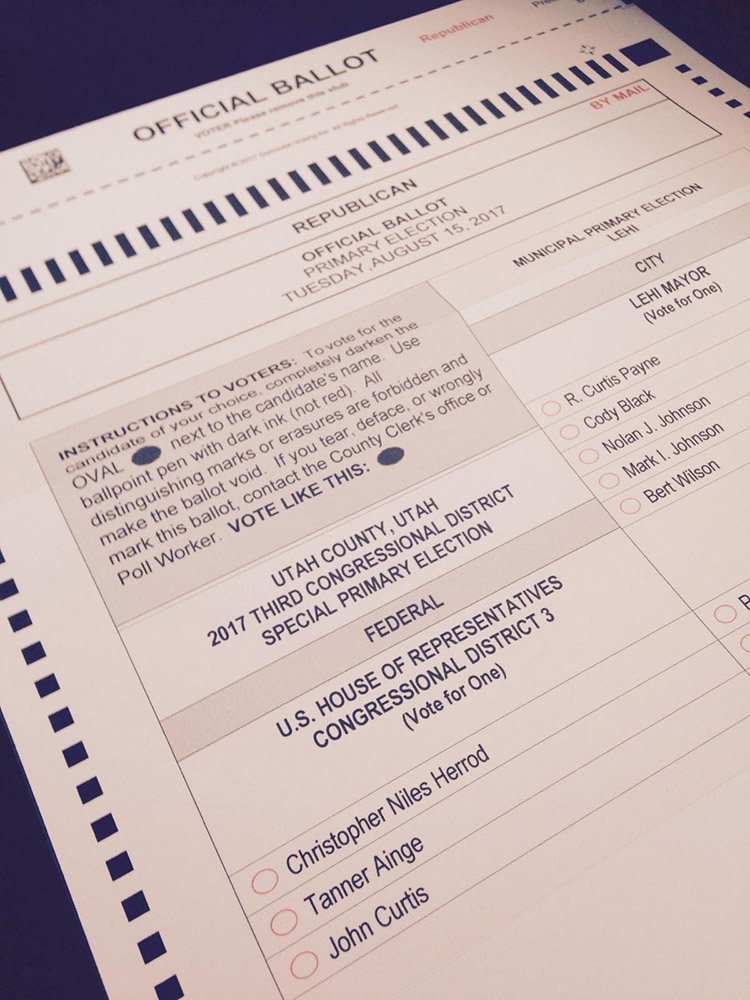 If you ask your friends and neighbors about how Utah’s County’s first county-wide vote by mail election went, you’re likely to find several who didn’t get to vote at all because they received no ballot. You may find one or two who got someone else’s ballot or maybe had two ballots mailed to them at separate residences. Some people even received ballots for their deceased family members.

As counties across Utah move to adopt vote by mail as their only method of conducting elections, Utah County’s handling of the process has raised serious questions about the problems possible under this system, including disfranchisement and fraud.

Among those reporting that they didn’t receive a ballot was Lehi resident Diane Leslie. When her son and husband received their ballots in the mail but she didn’t, she called the Utah County clerk’s office on August 2 to inquire about it. It was two weeks before the election deadline. They informed her that her ballot was returned by the post office marked undeliverable and they would spoil it and send her a new one.

But the replacement never arrived. She had to resort to casting a provisional ballot at the Lehi City offices.

Julie and Travis Sessions of Cedar Hills moved a year ago and changed their address with the city at the time, but they never received their ballots. Julie was able to submit a provisional ballot, but Travis was unable to make it back from work in time to cast his. However their son, who updated his information with the Utah Driver License Division when he returned home from an LDS mission a couple of weeks after their move, did receive his ballot.

“I thought it was enough to update it with the city,” said Sessions. “I fully expected a ballot to come in the mail.”

Orem resident David Kyle describes himself as a “super-voter,” someone who votes in every major and minor election. He has also managed a number of political campaigns. His family experienced multiple problems with vote by mail. Although he moved in March, life was busy and he didn’t get around to changing his address with the county until July 25.

The county told him his ballot would go out in the next shipment, and it did, but his wife never received her ballot even though they were told she would get one as well. She had to cast a provisional ballot.

“My mother received a ballot for my father, who passed away last year. My cousin didn’t get his and [he is such a super-voter] he even voted when he was on his mission!” said Kyle. “The whole system is inherently flawed. I think it disfranchises people. You’re also asking people to vote without a campaign, so those who vote early are at an information disadvantage.”

He also expressed concern with the possibility for losing ballots in the mail, or outright fraud when ballots arrive at residences where they no longer live.

Highland resident Kristen Chevrier saw the potential for this while canvassing for her preferred candidate. “I talked to several people while canvassing precincts who had the ballots of previous tenants or home owners,” she reported.

American Fork resident Chris Jolley, another super-voter, had a coworker who received two ballots, one at her address in San Juan county and another at her brand new address in Utah County, where she isn’t registered to vote yet. Meanwhile, Jolley’s ballot never arrived even after multiple calls to the county office. Because he was out of town on voting day, August 15, he wasn’t able to cast a provisional ballot.

Keith Kuder, Jr. reported that his ballot arrived in the mail the day before it was due, preventing him from getting it in the mail in time for the required postmark. “I wonder how many others this happened to?” he said.

Cathy Sorensen reported that when her son’s ballot failed to arrive, she took him to the Provo recreation center to vote. “While I waited for him while he was in line for about 35 minutes, I heard volunteers tell some people if they didn’t want to wait in line they could just skip the CD3 race and just vote for Mayor and city council,” she said.

Rob Crawley said he moved 3 months before the election and updated his address online one month before the election, but still got ballots sent to the wrong house (previous house) with the wrong candidates to vote for. He also received the ballot for the previous owner of his home.

However Utah Director of Elections Mark Thomas said the push is coming from the legislature, which passed a bill a few years ago which opened the door for vote by mail. “We haven’t pushed for or against it,” he said.

Those who advocate for vote by mail cite convenience and higher voter participation. Although studies show that participation in general elections jumps when a vote by mail system is rolled out, it decreases thereafter. However, for municipal elections vote by mail shows a sustained increase over time, said Thomas. He also cited time to study the candidates’ literature before voting as a potential benefit of vote by mail.

“There are a lot of good things about vote by mail and there are some challenges,” said Thomas. “It’s a new set of issues that you have to be vigilant on.”

Utah County voters who felt disfranchised or hassled by the process are eager to see what will be done to resolve those issues if Utah County and its municipalities continue to move forward with vote by mail.

Johnson, Wilson to face off in General Election