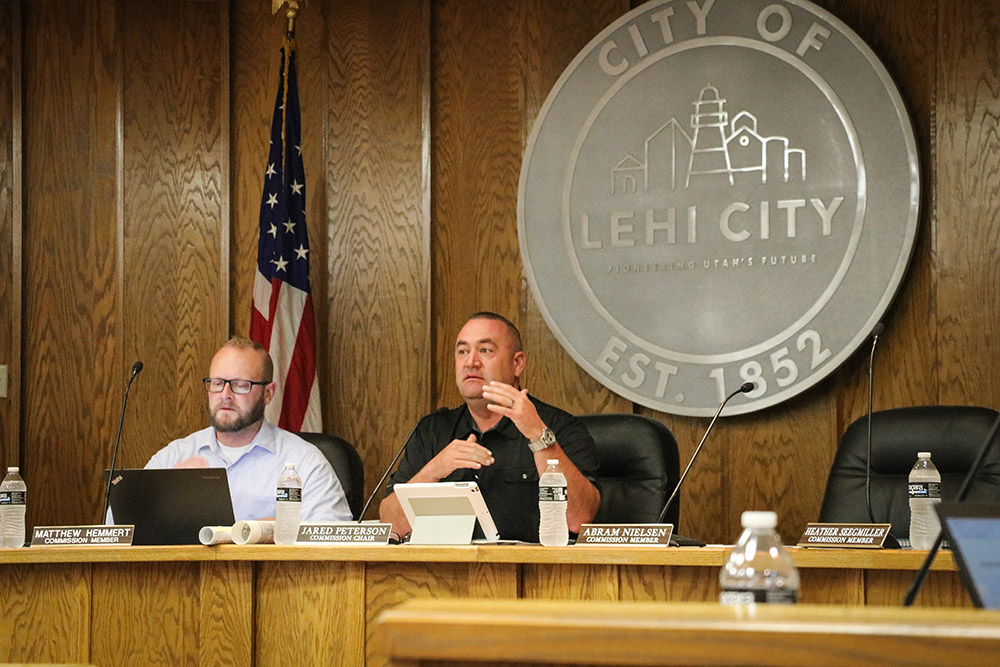 About two dozen citizens left the meeting after finding that TMTH’s request for an amendment to the Traverse Mountain Area Plan had been pulled from the agenda.

Thanksgiving Point is designated as a resort community. The resort community designation requires that 60% of the land be used for resort amenities, 30% commercial development, 10% residential, and open space.

According to Barlow, the de-annexation was being sought to “clean-up the area. This is a blighted area and a dumping ground,” said Barlow. During the public hearing section of the proposal, residents whose homes surround the proposed de-annexation, were adamant it not be approved.

Jodi Warner, a resident of the area was opposed to proposal and said, “The (Thanksgiving Point) plans were made many years ago. I am very concerned that master plans are overturned when anyone asks. There will be 29 homes effected by this proposal. At some point the Commission and City Council must take some responsibility for the residents that are already here. Please don’t ruin the reason we moved to Lehi.”

Jeff Scott, another resident of the area reasoned, “People living on the east side of the river have invested literally millions of dollars keeping the area as it is. You will be destroying wildlife habitat. The sole interest is NOT cleaning this area up. Sole reason is monetary. Millions of dollars can be made putting this into houses. Bait and switch is not good.”

Commissioner Everett, in response to the citizens said, “we have been criticized for messing around with area plans. We are getting close to the 10% limit on houses imposed by the resort community designation.”

Commissioner Hutchings said, “There is a problem with access into the area. A bridge would have to be built over the river.”

Commissioner Ellis added, “I am leery about taking it out of the area plan when we don’t know what it will be used for.

Commissioner Seegmiller continued, “The area was probably intended for open space in the original plan.”

Barlow said Ivory Homes is interested in acquiring the acreage for housing development.

The Planning Commission approved the request for the Lehi Hometown Car Wash on Main Street to be demolished to make room for a two story office building. | Sally F. Francom

Seegmiller made a motion to deny sending a positive recommendation to the City Council because there is not a good public reason for de-annexing the property and it goes against the goals of the resort community designation. There was unanimous approval for denial of the de-annexation by the planning commission.

A public hearing and request from Chad Staten for a zone change on 5.53 acres of property located at 1382 North 1900 West from A-1 (agriculture) to R-1-22 (residential) was approved. Several residents of the area expressed concern about the increase in traffic and road access. The recommendation was sent to the City Council with unanimous approval.

Don Payne requested approval of the Lehi Hometown Office concept. This would be a .21- acre commercial development to be located at 111 East Main in a Mixed- Use zone. Hometown Carwash would be demolished to make room for the office building. This project received unanimous approval by the planning commission.

Jenny Bullocks request for approval of the Bullock 2-lot subdivision was unanimously approved. The project is located at 550 West 2100 N. in an approved R-1-22 zone.

Ellsworth-Paulsen’s project of the Gray Farms Office site, a 4.68- acre commercial development located at 2176 West Main Street in a Planned Community was approved with a positive recommendation.

A positive recommendation was also given by the commission for the Eddington Estates preliminary subdivision, a 17- lot residential development located at approximately 1280 West 700 South in and R-1-22 (residential/agriculture) zone.

The next agenda item received several citizen comments in the public hearing portion of the presentation. Colledge Farms LLC’s request for the Colledge Farms preliminary subdivision, a 98-lot Planned Residential Development located at 2600 West 1200 North. Some residents expressed concern about the traffic that would be created with the large number of homes proposed. The planning commission unanimously approved sending a positive recommendation to the City Council.

During the meeting, Lehi City engineer Ross Dinsdale commented about additional traffic in some of the neighborhoods. He said, “city streets are typically safe. Most accidents occur in driveways and on dead-end streets.” He went on to add, “while our population has doubled our fatality rate on local roads has remained the same.”

The final agenda item was a request for a Development Code Amendment pertaining to regulation of food trucks. Commissioner Hemmert questioned the verbiage in several parts of the new amendment. It was recommended that the amendment be discussed in a work session.