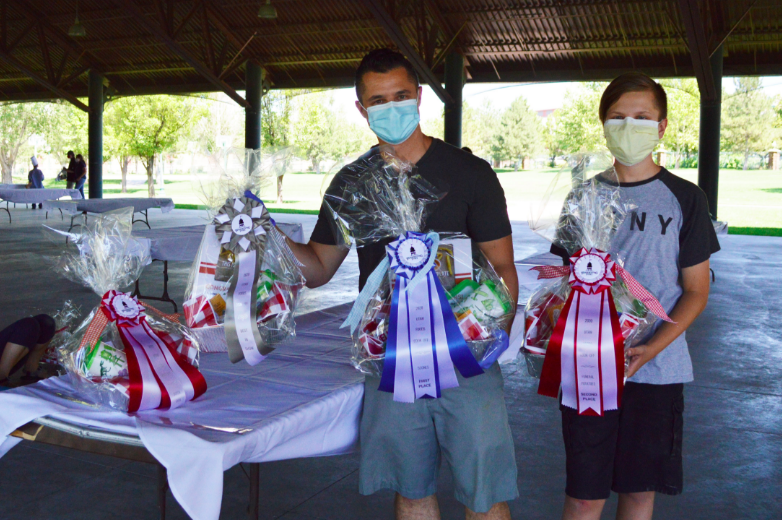 Participants in the 2020 Utah Foods Cook-Off had to play by a few different rules, but that didn’t stop them from entering intricate Jell-O creations, fiery fry sauces, pioneer-inspired Dutch oven dishes and funeral potatoes, and one courageous Utah-style scone entry.

“We didn’t allow as many entries this year, we have fewer judges, we’re using the whole pavilion for social distancing and we’ve encouraged everyone to wear masks. It’s nice that we could still do it,” said Amanda Lundberg, Signature Experiences manager for Thanksgiving Point.

The stiffest competition was in the Jell-O category with Lego Jell-O towers, a Vietnamese fisherman scene in tropical Jell-O, and a remarkable layered, donut-shaped Jell-O that took away the Best in Show. “I had to start with a mold and each layer had to be frozen for a specific amount of time. I wrapped it in mousse and finished it with a mirror glaze,” explained Adam Schwed, a doctor from Layton, Utah, of his jaw-dropping Jell-O. Along with Best in Show, Schwed took home second place in Dutch Oven, second place in Funeral Potatoes, and the lone entry, and therefore winner, of the Scone category. “Cooking and the science behind it are my passion,” Schwed said.

Eric Eliason served as one of three judges at the Utah Foods Cook-Off for the fifth time. Eliason has co-authored a cookbook, “This is the Plate,” with photos and recipes from past Utah Foods Cook-Offs at Thanksgiving Point. He couldn’t believe his eyes when he saw Schwed’s Jell-O entry. “Doesn’t making Jell-O stress you out?” Eliason asked Schwed. “No, it actually keeps me calm and focused. Baking bread is how I got through my residency,” Schwed answered.

The Welker brothers, Ethan and Thomas, had wins in the Fry Sauce and Funeral Potatoes categories. The Welker family has competed at the Utah Foods Cook-Off four years in a row and they always come away with a family season pass to Thanksgiving Point, one of the prizes for first-place winners. “We’re always testing new recipes. Of course, it has to taste great, but presentation is key. It’s so different this year, but I’m glad they’re doing what they have to do to keep everyone healthy and still have the event,” said Thomas Welker.

Eight-year-old Jake Burt dressed in a lab coat and safety goggles to display his fry sauce science. In answer to the question what makes fry sauce good, Jake said, “Ingredients.” Jake and his dad had a secret ingredient for their first-place entry, but they weren’t sharing it. “It’s not mayonnaise,” Jake hinted.

Krystal and David Mulder combined their German and Utah pioneer heritage in a meat loaf. The heavenly aroma of the Mulders’ dish reached mask-covered noses in the Electric Park pavilion, but only the judges got to taste it. “This is a favorite at our house. It’s the best of two worlds,” said Krystal Mulder. Their recipe earned the Mulders a first-place ribbon in the Dutch Oven category.

“This has been a fun get-out-of-the-house activity for us,” said Christine Rappleye. Christine and her sister-in-law Morgan Rappleye helped their young children build a Jell-O Lego tower that ended up taking third place in the toughest category. “My college roommates would be surprised to see me in a cooking competition,” laughed Christine.