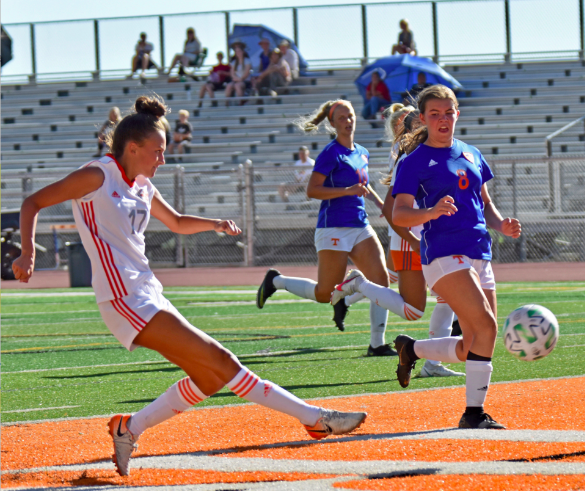 The Skyridge girls soccer team split its opening matches last week as they worked at forging a new identity after the graduation of 17 seniors from last year’s squad.

The Falcons won a thriller at Ridgeline on Aug. 4. The match ended in a 1-1 draw after regulation and two overtimes and the visitors triumphed 4-1 in a shootout.

Freshman Amanda Caswell impressed in her varsity debut. “She made our only goal in regulation on the first touch of her first varsity game,” said Skyridge coach Jerry Preisendorf.

Caswell subbed into the game about 15 minutes in and was in perfect position on a long corner kick. “She one-timed it right under the keeper,” the coach said. “It was a very lovely shot.”

Caswell also delivered what Preisendorf called “the nail in the coffin” as she scored the fourth penalty kick of the shootout.

The other three kicks were made by seniors Ellie Nelson, Emma Almond and Maddie Snyder. Junior goalkeeper Haley Ellis had two stops during the shootout, and the coach said she made five or six great saves during the rest of the contest.

The Falcons didn’t fare as well at Timpview on Aug. 6. The Thunderbirds rebounded from a big loss earlier in the week to beat Skyridge 3-0.

Preisendorf said he expects some bumps, especially early in the season. “We’re very young,” he said. “We’re still trying to get organized. We’re basically starting over.”

The Falcons have a couple of returning starters in senior middle back Sara Wirth and center midfielder Almond. Ellis started a couple of games in the net last year.

With Wirth as the anchor of the back line, Skyridge will defend by committee, at least initially. The coach plans to rotate senior Sid Hadley and juniors Lauren Bradshaw, Alexa Balls and Hadlie Bullock with sophomore Tessa Miller in the mix.

Junior Olivia Driggs is tapped as the defensive midfielder. Junior Emily Auman also plays in the middle. Freshman Emma Hughes is the center forward with Snyder on the left and Nelson on the right.

“We’re still working on lineups,” Preisendorf said. “We play a lot of possession and conditioning is important to our style. That was a factor in our favor against Ridgeline. If the girls can have patience in the system, we’ll come along.”

In ultra-competitive Region 4, the coach said American Fork and Lone Peak are the teams to beat, as they always are. “The rest of us will try to find a spot in the tournament,” he said. “Finishing in the top three is our goal. With the new ranking system, every contest counts, so we can’t afford to take any games off.”