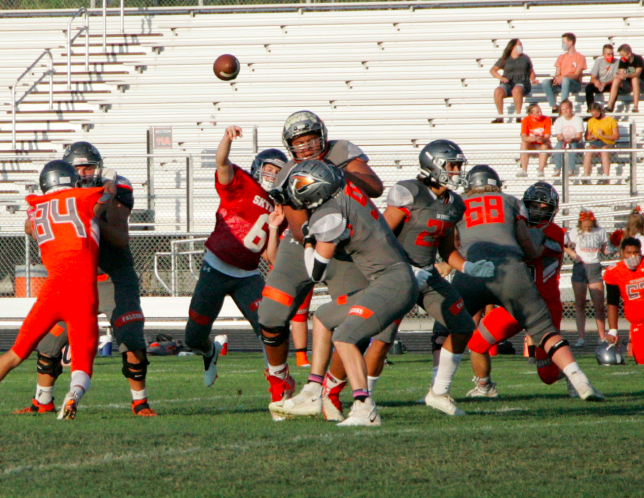 In the fifth year of Jon Lehman’s tenure as Skyridge High School head football coach, the Falcons are looking steady as ever.

Skyridge finished with a 7-3 overall record in 2019 and tied for second in Region 4 with a 3-2 record. Its RPI seed was No. 4 in the 6A playoffs, but the Falcons were eliminated by region rival Lone Peak 30-6 in the second round.

In its short history, Skyridge has played in the state final game twice and has been crowned region champs once.

This season looks promising for the Falcons under the strong guidance of Lehman and his experienced coaching staff.

“I really like this group of guys; they play really hard and are very athletic. They love each other. Our group of coaches are super fun to coach with and we are having a great time,” said Lehman.

The Falcons are taught to be disciplined and to control what they can in their play. “This team goes day by day, that has always been the staple of the program. Control what you can control and follow the rules that are given to you,” said Lehman. That keeps the Falcons focused.

Lehman said, “We have a really good defensive line. If you work all the way back, Colby Dulle has been a leader on defense at outside linebacker with getting players lined up, and he’s really sharp and in control.”

Jackie Lambert and Sawyer Winward are also smart and athletic in the safety position. “Lambert and Sawyer really understand the defense,” said Lehman.  Coleman Beck and Smith Snowden are first-year starters at corner. The coach said they both look athletic and ready for varsity play.

On the offensive side of the ball, Skyridge returns five starters. Falcon offensive coordinator Joel Lira said, “James Palmer has stood out, he can run great routes with solid hands.

“Mitch Adamson as an outside receiver runs really, really clean routes and he high points the ball well. He is explosive out of his breaks.”

Another standout is Jeter Fenton at running back. This is his second year starting and he appears faster and stronger than last year. “Fenton, in between the tackles, can do some great things out of the backfield,” said Lira.

Toilolo and Dallin Richards look strong on the offensive line and will be charged with leading the protection of a new quarterback.

Junior in-state transfer McCae Hillstead has earned the starting nod against Alta after a spirited battle with senior Cam McClellan. Lira said, “They can both execute the offense at a high level.”

Both players appeared confident in running the offense during Saturday’s Orange and Gray game. The strong defense executed plays with their size and precision. The defense mixes it up with three-man and four-man defensive lines.

“There is a lot of talent up front and we are working to use it. We like to be versatile with different looks. We have adapted in new ways this season,” said Lehman.

The Falcon offense was poised and polished during the scrimmage. The plays were executed flawlessly and the offensive line was controlled and appears solid.

The Falcons do not seem to be shaken by the challenges of COVID-19. “They have adjusted to the new protocols in place and they are grateful to be here and we are blessed to be playing football,” said Lira.

Lehman expects his squad to be competitive in the state’s toughest 6A region. The team’s work ethic will give them a boost toward a successful season in hopes of returning to the state championship contest once again.