My ascent to the summit of Kilimanjaro 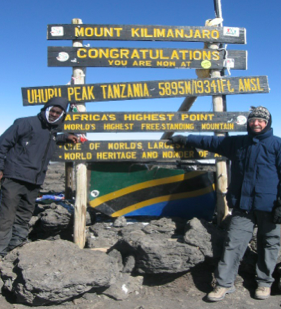 Last year, I traveled to Tanzania in Africa to climb Mount Kilimanjaro. It is the fourth highest of the Seven Summits, which are the highest mountains on each of the seven continents. In his famous 1936 short story, “The Snows of Kilimanjaro,” Ernest Hemingway described the mountain as ​“wide as all the world, great, high and unbelievably white in the sun.” More than eight decades later, not a word of that description needs revising.

The expedition company, Climb Kili, joined me with six other trekkers. We started as strangers, but the experience made us fast friends. The expedition company recommended the Lemosho route because it is Kilimanjaro’s longest and least traveled approach. It gave us eight days on the mountain versus the usual five for the heavily traveled Marangu or the Machame route. The slower ascent would give the group more time to adjust to altitude, which increased our chances of reaching the summit. The Lemosho also offers a much more aesthetic experience, as the other routes are littered and polluted.

Climbing this mountain is interesting, though precarious. You don’t have to be an expert climber to ascend Kilimanjaro, because the mountain does not require technical prowess or the use of ropes and crampons. Nevertheless, the 19,340-foot elevation is a challenge for most people. At the peak, there is only half the oxygen available at sea level. Weather, altitude sickness and exhaustion converge on climbers near the top.

That is where I found myself after five days of climbing, at over 15,000 feet elevation on the way to Lava Tower. We had been climbing for four hours that day. Our guide, Ernest, said that it was higher than most small planes fly. At best, it’s two breaths per step. “Pole, pole,” the porters would chant. In Swahili, that means ​ “slowly, slowly.” No one in the group was racing. Silently to myself, I chanted ​ “pole, pole” to the tune of the 1960s song “Wooly Bully.” Ernest said the slow ascent would help us acclimatize to the thin air. I believed that he was also mentally sizing us up to see how strong we were at that elevation.

In my altitude stupor, all I could muster was a quick look around. The spectacular scenery seemed a bit out of focus. Light snow was falling, making the steep rock even more slippery. Clouds drifted by; we were in them one minute and out the next. I heard someone vomiting behind me, another victim of acute mountain sickness. Ernest took their pack. I asked if I could help too, but it was just an automatic response. I was just trying to keep myself moving. It seemed as if we would never get to the next camp.

We were a far cry now from the natural splendors of our first few camps. On those lower respites, our routine would be, rise at 7 a.m., when the amiable porters would bring tea, coffee, and hot washing water to our tents. Breakfast would be served around 8 a.m., after which we would pack our gear and hand it to the porters. Then we would begin the day’s hike – anywhere from four to six hours – while the porters dismantled camp. Along the trail, the porters would pass us. The agile, vigorous Tanzanians, some with 80-pound loads and worn sneakers, seemed superhuman. By the time we arrived at the next camp, they had our tents pitched and dinner cooking.

The next day we hiked to Barafu camp, where the many lower trails merge, and the site was already crowded. I could smell it from a mile away. Our guide wisely took us to a higher camp that was less crowded. Camps consisted of two-person tents and a large mess complex for meals. At night, at the lower elevations, we congregated in the mess tent, told jokes and swapped stories. At Camp six, with an elevation of 16,000, we quickly ate dinner and then prepared for the ascent to Uhura peak.

Uhura means “freedom” in Swahili; the summit was given that name after Apartheid. As is the tradition for big mountain climbs, we planned to leave at midnight. That gives everyone the best chance of summiting and returning before darkness overtakes the mountain.

As I tried to sleep, I thought about our plans for the next day. How would the group handle the last 3,000 vertical feet to the summit? The head guide had carefully checked everyone’s oxygen levels and declared us fit enough to go for the summit. With this boost of confidence, we went to bed determined to do whatever it took to reach the summit. Half the battle in high-altitude climbing is mental, and the guide knew it.

The 11 p.m., our wake-up call didn’t bring warmth. It was still below zero, so we layer on all of our clothes and departed around midnight. As we began the steep ascent, the exertion warmed us somewhat. We joined the long trail of headlight lamps gradually moving up the mountain. The air is thin, so we make slow, steady progress. Ernest was right; the extra three days of acclimatization had done their job. Most of us feel better than the day before. After five hours, the sky began to lighten, and in another hour, the sun dramatically broke over the expansive Serengeti plains.

We arrived at the summit at about 8 a.m. Stretched out before us was a wide field of broken volcanic rock nearly four miles above sea level with the famous sign at the top. We paused for some snacks and waited for our turn to take some pictures. Soon it was time to begin the long trek down. The plan was to descend via the steep M’weka route, making camp at 10,000 feet. We knew that 9,340 vertical feet is a lot to drop in one day, but with small packs, it was doable. Moving with the easy momentum of a descent, we reached Camp seven at 4 p.m. We were tired but happy. Sleep, for the first time in a week, was not a problem.

We emerged from the bush and into town, 24 hours later, with the scaly grubbiness of eight unwashed days well rinsed off, we were civilians again. We dined at a touristy but interesting restaurant. It was perfect, as we were ravenous for meat after eight days of starchy pastas, potatoes and cereals.

During the evening, we talked about the next mountain we could climb. Someone suggested Mount Blanc in Switzerland. I remember my secret pledge to myself to never climb a big mountain again, then I recall that I do that on every climb. It must be climber’s amnesia, remembering just the good parts of an expedition – never the pain.