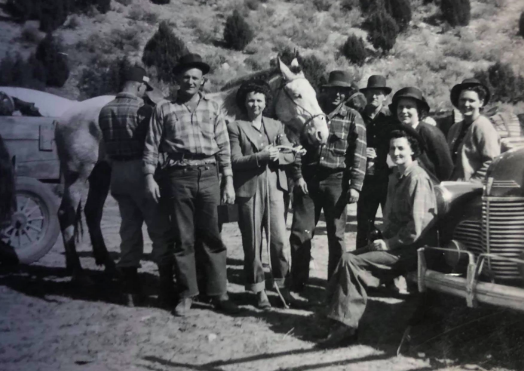 Fire Department summoned to Anderson home: “A small patch of shingles on the roof of the home of Mr. and Mrs. Abraham Anderson was destroyed by a fire Tuesday morning, which threatened the entire house. Through the quick work of Mrs. Anderson, Mrs. Suel Zimmerman and the local fire department, the fire was extinguished before a great amount of damage was done.”

Milk for mal-nourished kiddies promised by local Lions Den: “…  the Lehi Lions Club has again adopted as one of its local projects the furnishing of one pint of milk daily to the mal-nourished [sic] children of the Lehi public school. The move this year, in view of the economic depression from which we are just beginning to emerge, will be larger than usual.”

Wake up your liver bile—without Calomel: “And you’ll jump out of bed in the morning rarin’ to go. If you feel sour and sunk and the work looks punk, don’t swallow a lot of salts, mineral water, oil, laxative candy or chewing gum and expect them to suddenly make you sweet and buoyant and full of sunshine. For they can’t do it. … Ask for Carter’s Little Liver Pills.”

Local Items: “The Vanguard scouts of the Third Ward, under the direction of their leader, George Ricks, enjoyed a bon-fire party up in the creek last Wednesday evening. They participated in games and stunts and roasted weinnies [sic] and marshmellows [sic]. All report a merry time.”

Local Items: “Mr. Bernard G. Webb and son, Ward, purchased nineteen head of purebred Holstein cows from the State Fair last week. They have sold out of their grade stock, numbering thirty-one head. Mr. Webb states that he thinks they will have much better success with these few very high-testing stock than with a larger number of other grade cows, which are inferior stock. The cows that they now have are of the very best stock, he reports.”

Local Items: “On Saturday afternoon Dr. and Mrs. F.D. Worlton, Mr. and Mrs. D.R. Mitchell and Mrs. A.F. Webb attended the football game played at the University of Utah stadium in Salt Lake, between the U. of U. team and the B.Y.U.”

Local Items: “Mr. S. E. Littleford and son, Grant, are hunting deer out in the Vernon country this week. … Mr. A. B. Wright and son arrived home with a large deer late Tuesday night. Elmer Jackson and son, Clell, Joseph Roberts, Leon Peet, John Southwick, Morris Fox and William Ritter are also among the deer hunters from this city.”

Local Items: “A large group of men and boys from Lehi joined in the deer hunt the first part of the week. George P. Price, Roger Price, Ray Carter, James Carter, Chester Snyder, Ruel Evans, Fred Wanlass, Robert Roberts, Noble Evans all went out from Holden. George Price and Roger returned home Tuesday night, both with a deer. Gerald Taylor returned home with his deer Tue. night, caught out west near Point Look Out. Bert Beck, Art Beck, Carlos Coates, William Powell, Richard Bone and Bud Otterson went out west and at last reports Bert Beck and Bud Otterson had been successful in shooting their deer. James Comer, Stanley Clark and Edward Larsen went down to Beaver. Hugh Otterson, Arlie Clark, Claude Curtis and Alva Wing journeyed to Vernon and W.W. Dickerson and Bill Dickerson went down near Huntington. Ira Racker and Ellis Powell went out west and each of them returned with a deer. Other hunters were LeRoy Davis, Bazil Dorton, Alex D. Christofferson, Glen Bushman, Lydale Peterson and others. Many of them had not returned when we went to press, so we cannot tell whether or not they were lucky.”

If you would like to know more or find other Lehi newspapers, check out digitalnewspapers.org where all Lehi newspapers that have been digitized are available for free. The Lehi Free Press is available thanks to a matching grant obtained by the Lehi Historical Society and Archives from the Utah State Historical Records Advisory Board and funding from Lehi City.