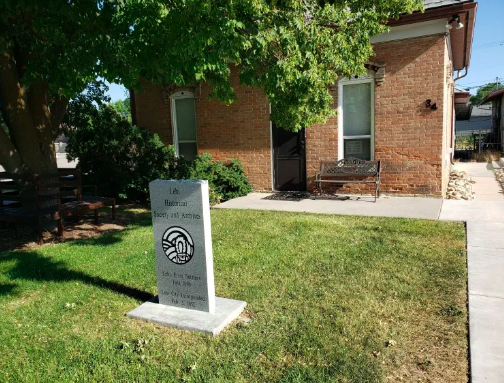 I love old things. I always have, and I guess I always will.  As a young girl, I fondly remember walking past the Strasburg house on my way to the Royal Theatre, smelling the wonderful aromas coming from their home (The Strasburg sisters were wonderful cooks). The house stood on the corner of First East and State Street and was the oldest house in Lehi.

When the house came for sale in 1994, I heard it was planned for demolition and a car wash constructed in its place. We bought it to save it. We had a small boutique called Scrooge and Marleys in the home for almost 20 years. When we were told the building wasn’t a viable structure, we knew we had to sell. We sold the home in 2013 with one stipulation, a replica of the house was to be built in its place.

One of the saddest days in my life was in the spring of 1962. I witnessed a wrecking ball topple of the spire of the Lehi Tabernacle. The beautiful white building was the “Town’s principal landmark,” wrote prominent Lehi historian Richard S. Van Wagoner. It was the first thing one could see approaching Utah Valley from the Point of the Mountain. Old Folks parties, band concerts, graduations, minstrel shows, and many other community events were held in the building. Richard Kletting designed the building. He also designed the Utah State Capitol. When city leaders announced plans to tear down the tabernacle, and a new building built on the property, many Lehi citizens were upset.

Fewer and fewer historic buildings are remaining in Lehi. One of the most historic and beautiful buildings in Lehi is the Thomas Cutler Mansion on State Street. The house was built in 1900 by Thomas Cutler, the Utah Sugar Factory CEO. The Georgian-Victorian Mansion is the only one known on this side of the Mississippi. There is 5,054 square feet of living space, and it sits on one acre of land. The present-day owners are Wallace and Arlene Olsen.

In a conversation I had with Olsen last fall, he indicated the property was listed for sale at $1.2 million. We discussed the idea that the home would be a fitting place for relocating the Lehi Historical Society and Archives. Olsen was excited about this proposal. Olsen, a long-time antique dealer, has lovingly restored the property and thought housing the archive’s collections was a good idea. He even said he would lower the price to $1 million for such a proposal.

The Lehi Historical Society and Archives has yet to have a permanent home. For several years, the first director, John Haws, found a home for collecting and cataloging the “Archives” near the Cranberry Farms development (off 2100 North). He soon outgrew the space. The “Archives” was moved to the old Smith home located south of the Lehi City Office Complex. When Lehi City needed to expand the parking lot, the “Archives” was moved again to the Rippy Literacy Center basement, where the Lehi City Planning offices had been located.

Why is it essential to have a suitable location for Lehi City’s historical documents, paintings and memorabilia? Researchers have long known that individuals who have strong ties to their past are generally healthier and happier. Having a beautiful historic building would enhance Lehi City and the heritage that many old-timers and new residents treasure. Many who move to Lehi express love for the “old-time feel” of Lehi.

Lehi City is constantly investing in new infrastructure. While we know that water, sewer, roads, and power are vital, I feel having a place of historical significance where Lehi’s history is celebrated and preserved is equally important.