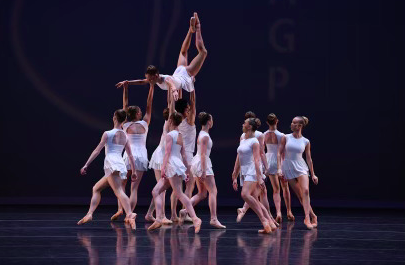 When Lehi native Jacqueline Colledge founded Jacqueline’s School of Ballet (JSB) in 1976, she never imagined the recognition it would receive 45 years later.

Starting with just six students, Jacqueline had to call people she knew and ask if she could teach their kids for free. She remembers those beginnings with a laugh. It didn’t take long for the school, driven by her skill and enthusiasm, to start growing, and by the end of the first year, Colledge had 100 students. By the end of the second, there were over 200.

Colledge, a former Ballet West soloist who everyone calls “Jackie,” taught every student herself during the first ten years. Then as her students grew up, some of them joined her and started teaching alongside her. Eventually, her daughters joined the staff, and in time, they took over running the ballet school.

Competing against 233 other schools from around the world, JSB earned the top honor of “Outstanding School” at the Youth America Grand Prix (YAGP) international finals in Tampa, Florida. JSB student Sylvie Squires, 16, won the individual Gold Medal. She competed against 131 other dancers in the senior women’s division for ages 15-20.

Sylvie Squires, Colledge’s granddaughter, has earned several other awards in the program, including the title of Grand Prix Winner at a semi-final competition in Dallas in January.

Two years ago, Sylvie was expected to perform well at the YAGP finals in New York, but a few weeks before the event, she sustained an injury that kept her out of the competition. She said she was really sad when that happened. Then the feeling of having to keep waiting for a chance to perform on the international competition stage was compounded by the cancellation of the competition last year due to COVID-19. So taking the gold medal was especially meaningful for her this year.

“I was kind of shocked, really excited,” Squires said. “It was such a cool experience.”

Sylvie will perform her winning piece at a YAGP gala in Genova, Italy, this summer. She plans to finish high school and then dance professionally with Ballet West.

The school also won an award in the ensemble division, placing second with the piece, “Cortex,” choreographed by Heather Gray, Co-Director of Utah Metropolitan Ballet II (UMB II). The ensemble was composed of one man and 13 women. One of those women, Kate Deschler, is a Lehi resident. Another dancer from Lehi, Alayna Kirkham, had the distinction of performing with the second ensemble that JSB sent to Tampa. Gray is one of Colledge’s daughters, and UMB II is the training school for the Utah Metropolitan Ballet (UMB), which Colledge founded in 1980.

Gray said they felt highly honored by the recognition. “I know how many companies and how many schools bring their students. There are some exceptional schools. We go every year and are just in awe of all the beautiful students.”

Colledge expressed similar feelings. She said the award felt like an affirmation of all the hard work that she and many others have put into the school over the years.

Jackie didn’t attend the finals because she was directing rehearsals and performances for UMB’s spring performance at the Scera Center for the Arts in Orem. But she made the time to watch the live stream.

Dancers and ensembles must achieve a specific score in regional competition or be extended a special invitation to attend the YAGP finals. This year, JSB was able to send seven dancers and two ensembles of 14 dancers each. This number of dances is considered an accomplishment in itself.

Colledge said it was her daughters, Gray and Brittney, who pushed forward the idea of competing in YAGP.

“I really hated the idea of competition at first,” Colledge said. “I don’t want kids to feel like they’re competing against each other. I want them to all be happy for each other.”

When they finally decided to do it, they sat down with the parents of the dancers and told them the focus of their participation in the YAGP program would be on the growth opportunities it provides. They emphasized the detailed coaching, scholarships and other opportunities it makes available.

“After they did it the first year, I thought, this is incredible,” Colledge said. “You can’t get those kinds of opportunities anywhere else. It’s just turned out to be a really great thing for dancers.”

Lehi Arts in the Park schedule