Vintage Vignette: A lesson in sugar beet thinning - what is your name worth? 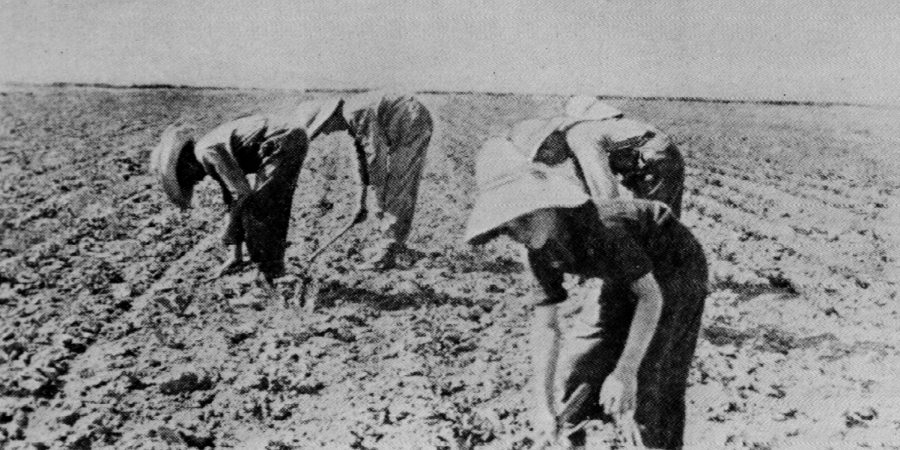 One May morning in 1960, twelve boys climbed into Lehi farmer Ruger Gordon’s pickup truck. It was 5:30 a.m. and we all had a gallon jug of water and sack lunch as had been explained to us by Mr. Gordon the night before. He had solicited the help of young men willing to “thin beets.”

All boys who showed up at his house in response to an advertisement posted in the Lehi Post Office the week before were hired that night. I had never performed that common “row crop” task so dad gave me a quick lesson the night before using backyard weeds as an example.

“The quality of your work will be determined by Rudger who will judge whether you are a good worker or not by the lack of both weeds and double beet tops in your assigned row. Don’t try to go too fast just to earn money. He will probably pay you by the row completed and not by the hour. If you fail at doing what he asks you to do, he will not pay you for those rows you have not done correctly. That will assure him that good work is done.” “Okay,” I said without listening closely to what he had explained to me. “Rudger is a good man and he will pay you fairly if your work is done thoroughly and efficiently.” “Okay,” I said for the second time, tired already of hoeing backyard weeds.

I knew most of the boys in the truck; Paul Glathar, Lee Woffinden, Gary Hardman, Tim Allred, Max Smith, Dennis Huggard, Paul Gurney, Allen Gurney, Paul Asay, Stymie Wilson and Ed Myrick were some of the young men I recall jumping into the truck as we headed out toward Saratoga. Rudger’s beet field bordered the Shiba farm close to where Saratoga Springs now exists.

When we arrived at the farm, Rudger set up a folding chair and table. His water was in a canvas water bag. He had a clip-board and wrote down all our names in a vertical column then scratched four or five similar blank columns to the right and then horizontal lines making boxes beside our names. He pointed to the boxes beside our names and said, “those boxes represent rows of beets. You will probably only get three or four rows done today and I will pay you two dollars per row if you do them right. If I check and they are not done right, you will not get paid for that row. Do you understand?” We all nodded.

He then showed us how to hoe the beets the correct way. He handled his hoe like Ted Williams could handle a bat. He made it look soooo easy. I told myself that I would do five rows that day. “Keep your hoes sharp,” he said. “Here is a file on my table you can use if you need it,” he continued, showing us how to sharpen a hoe blade. Each row was about 200 yards long. He said, “we will work till eleven ‘o clock, take a half-hour lunch break, then work till 3:00 p.m. When you finish a row, come tell me and I will check it off your box list, and assign you the next row. If you don’t check with me, you will not get credit for that row. Do you understand?” We all nodded. “I want to finish this field in two days fellas, so do good work and I will hire you again next week,” he added.

I was going to prove to Mr. Gordon that I was the best beet thinner he had ever hired. I took off on my assigned row and within 30 minutes I was ahead of everyone. Weeds and beets were flying off my sharpened hoe at nearly twice the pace of my friends. I glanced up to see Rudger walking up the rows of each boy and knew he would marvel at my amazing work.

After my first row was completed in about 90 minutes, I led all “thinners” by at least 40 yards. I went over to him at the table and said, “one row down Mr. Gordon!”  He looked up at me and in his deep, gravelly voice and asked my name. “Bill Fowler,” I said. “You Don’s boy?” he queried looking at me with a very stern and weather-beaten face. “Yup,” I answered. “Well, son, I walked up your row and found some doubles and about ten small weeds in the first thirty yards. I will pay you one dollar for that one.” “Oh….okay,” I said with a bright red face. “I’m sorry,” I stammered. “I’ll do better.” “Yes,” he said, “you will do better or you will not be here tomorrow,” he concluded emphatically.

I sharpened my hoe and went over the next assigned row. I had worked really hard and fast on the first row and wondered why perfection was such an important issue. I told Ed Myrick and he said that “if there is a double, both beets will only grow about as big as lemons. If you take one away, they will have room to grow as big as cantaloupes. That is why he was angry.” “Ah,” I said slowly. I worked hard and got two more rows done by the end of the day.

When we finished that afternoon, he reprimanded a few boys for their “poor work,” then turned to me, handed me five one dollar bills, and said, “I won’t need you tomorrow, I found two more doubles in your third row! I can’t believe you are Don Fowler’s son!” All the boys looked at me then dropped their eyes to the ground realizing I had been fired.

I held tears back all the way home and never looked up at anyone’s face in the truck. When I got home, I told mom and dad the work had gone well and that I was tired and sore. Dad laughed and nodded. I ate supper trying not to cry. All family members at the table interpreted that as a sign of my physical exhaustion. The next morning, I awoke to my 5:00 a.m. alarm, dressed in my work clothes, grabbed my lunch, and rode my bike down to Mr. Gordon’s house. I wanted to be the first one there…and was.  He saw me and held up his hand as if stopping a car on the street.  Before he could say anything, I got off my bike and went up to him and quickly said, “I am very sorry for my poor work yesterday, I will work again today for no pay and if my work is okay at the end of the day, I would like you to re-consider me for next week.” He looked at me for what seemed like a long time and finally said “that’s a deal son!”

I told my working buddies I had been given a second chance. They laughed and we headed out to the Gordon farm. I worked hard the second day and completed three rows. My lesson from the day before kept all lads in a quality work-mode all day. Again, Rudger paid everyone in cash. I jumped into the truck without anyone noticing I had not received any money. “Hey boys,” Rudger said walking slowly over to the pickup, “I want all of you to come back next week.” He then handed me six one dollar bills and said, “you forgot to get your money Bill” while he looked directly into my eyes. “Your name stands for hard work son, your dad would be proud of the job you did today, and that goes for all you boys!”

That summer I learned a great lesson that would stay with me for the rest of my life, and have held Rudger Gordon in high esteem as one of the great teachers I have known.

From the archives: “You better believe it!”

Our Opinion: Start with a Park