Lehi City spending by the numbers 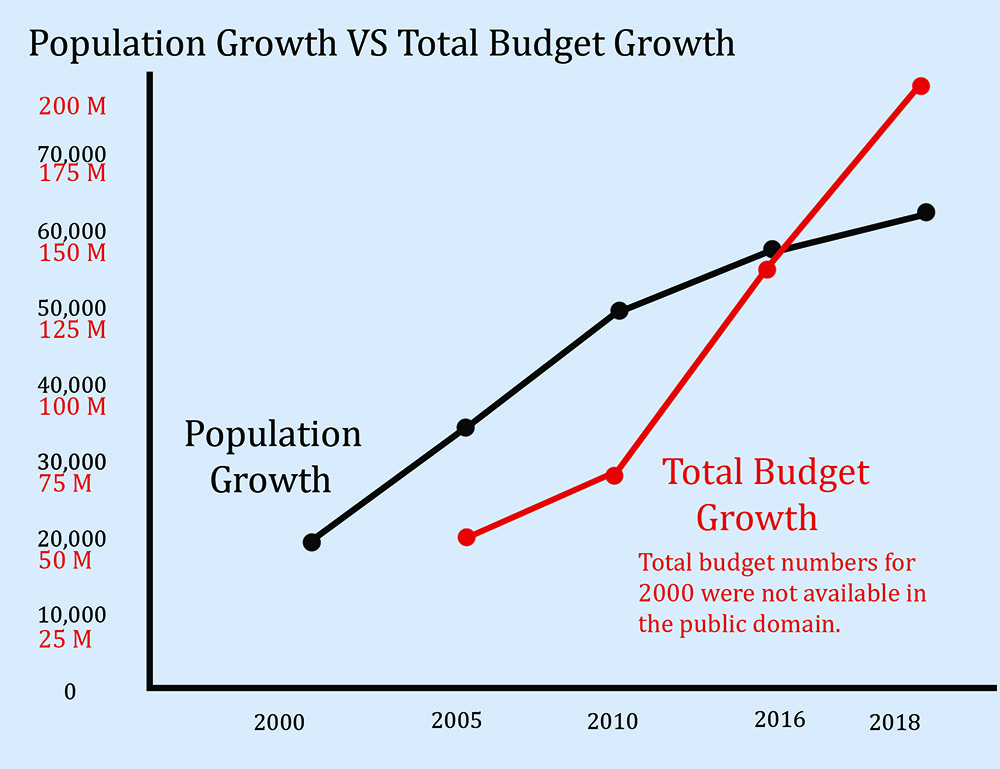 Editor’s Note: All budget data used in this article can be found at the following sources – Lehi City’s Final Budget for 2018 and the Utah State Tax Commission website.

Anyone who has lived in Lehi over the past 10 years knows that significant changes have taken place in our community. Those changes are even more significant for those who have been here 20 years or more.

Lehi has had boom times of significant growth and change over the years. Early booms were tied to agriculture (mainly sugar beets and grains) but our recent booms have been related to high-tech companies. The boom of the mid 1990’s was fueled by the development of the Micron Technology project (now IM Flash Technologies), Cabela’s, and the dramatic expansion of Lehi City’s utility systems that accompanied those efforts.

Our current boom is driven by a diverse group of companies including software giant Adobe as well as local success stories like Vivint, Blender Bottle, and Young Living. Major retail developments, including The Outlets at Traverse Mountain, have sprouted up alongside a new hospital and medical offices. The housing part of the boom has been staggering and continues to grow.

Total anticipated property tax collections in the current fiscal period are nearly $22 million, but more than 60% of those tax dollars are diverted to Redevelopment Agency projects (RDA). Another $820 thousand in sales taxes from the Commercial Development Agency (CDA) covering the Outlets at Traverse Mountain is also being re-directed from the general fund. The total property tax collected and diverted to RDA/CDA projects is more than $13 million in 2018. The property tax budgeted for use in providing city services is $8.6 million.

In 2000, Lehi City reported its total tax revenues from all sources at just $3.4 million dollars. Today’s number is ten times higher at $34 million. The City’s total spending in its fiscal 2010 budget was $73 million and the adopted budget for the current fiscal year is $198 million. General Fund property tax collections in the general fund have increased from $857 thousand in 2000 to $8.6 million in the current adopted budget for another ten-fold increase.

In the last several days, Lehi City has publicly pointed out that the comparison with Orem isn’t an “apples to apples” comparison. In a Lehi City Facebook post responding to this article (published on July 20), the City suggested that the comparison is unfair because Orem does not operate an electric utility. This is true. The City member who created the post didn’t go on to do the math and make the comparison. Here is the math:

Recent growth has also resulted in a strong increase in Lehi’s total market value as determined by the County Assessor. In 2000, the total valuation was approximately $723 million. By 2015 the number exploded to approximately $6.2 billion, an increase of more than eight times. Lehi City now accounts for about 13% of the entire valuation of Utah County, up from less than 6% in 2000. By comparison, American Fork’s 2015 valuation was about $2.6 billion, less than half of Lehi’s value in the same year.

All information included in this article was found in official documents available in various online sources. Market value information is from the State Tax Commission. Attempts were made to obtain a comment/input from Lehi City prior to deadlines for the printed article. Lehi Free Press did not receive a response in time for the deadline.

Lehi Homestead: Gardening from the ground up in Lehi