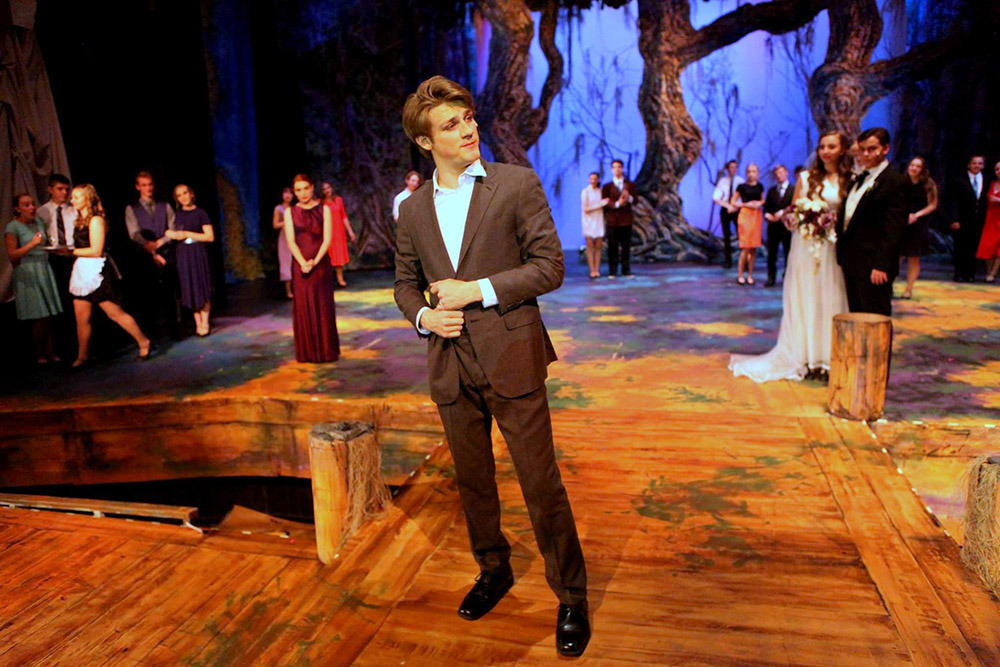 The musical “Big Fish” is about a father, Edward, teaching his son by telling stories from his life. The majority of the show is in Edward’s imagination, where the setting can go from a circus to a Boy Scout camp in the same act. Mindy Nelson, Lehi High School’s Drama Department Head, chose “Big Fish” because she loves it and because of the life lessons it gives her students a chance to explore.

“We always try to choose a show that will teach our kids something and influence the audience in some way – make them think and reflect. This show really does that with family relationships,” said Nelson.

There are over 80 students in the cast of “Big Fish” and 27 more in the crew. The students are involved in all aspects of the production, from acting and singing, to set and costume design, and sound and lighting. Once again, Lehi artist Randy Blackburn has spent hours creating a masterpiece in the painted trees and daffodils that make up most of the set. Blackburn gives the audience the feeling of looking into someone’s dream. A.J. Black, who plays the lead character, Edward, helped Blackburn build the set. Lehi High School is utilizing the sides of the stage, as they often do, helping the audience to feel like they’re a part of the story.

The character of Edward is a master storyteller. He’s trying to help his son, Will, understand the world as being more than just facts – that there is complicated beauty and poetry in life as well. “I love the music, it’s absolutely beautiful. I love Edward! I get to play him from age 15 to 60 years old. There’s so much to every single character,” said A.J. Black. Sadie Veach plays Edward’s sweetheart and wife, Sandra. “I live for this program! This show has taught me so much about love – love between husband and wife and parent and child,” said Veach.

“One of the things we are constantly working on is helping the kids think about what they want to create. Their level of understanding and analysis of the words on the page is much stronger than most people think high schoolers are capable of,” explained Nelson. “In all honesty, Edward in real life is artist Randy Blackburn. It’s been really nice to have a representation of Randy up on the stage. He is truly teaching these kids through his story telling.”

Opening night for “Big Fish” at Lehi High School is today, Thursday, November 16, at 7:00 p.m. In order to gain the most support for the football team at the state championship, the LHS drama department will not present the Friday-night show, but will add two performances after Thanksgiving break. The new show dates for Big Fish, the Musical, will be November 16, 18, 20-21, 27-28 at 7 p.m. The drama department encourages all to cheer on the Lehi Pioneers at the state championship game.