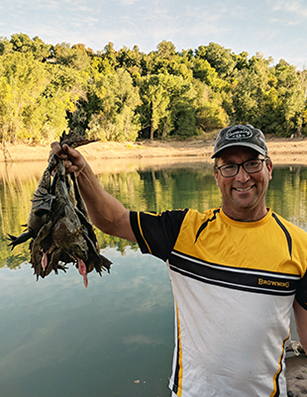 Mark Twain’s short story, “The Celebrated Jumping Frog of Calaveras County,” brought him his first success as a writer and brought him national attention. Bullfrogs of Utah County, however, are not so celebrated, and the Utah Division of Wildlife Resources is encouraging Utahns to catch and even “eat” the invasive bullfrog, according to Faith Heaton Jolley, the public information officer for the DWR. Wildlife officials have had their eye on the American bullfrog, which is not native to Utah, for over 40 years. Today they are present in many ponds, streams, marshes, and lakes all along the Wasatch front, Utah Lake and in around the Great Salt Lake.

“We don’t know when bullfrogs first arrived in Utah, but we do know that breeding populations have existed here since the early 1970s,” writes Ja Eggett, in an article titled “How to catch and cook bullfrogs.” Eggett is an outdoor enthusiast, “frogger”, and DWR employee. According to Eggert, bullfrogs are voracious predators that’ll eat almost anything, including snakes, fish, toads, and mice. The American bullfrog can grow to a length of eight inches and can weigh up to one and a half pounds.

There is no limit and no season on bullfrog catching in Utah and a “frogging” license is not required, according to Jolley. “If you see a bullfrog, catch it and kill it because it’s an invasive species to Utah. It is, however,  illegal to transport a live bullfrog,” said Jolley. “You should kill it soon after you catch it.”

Eggert, however, suggests having a fishing license while pursuing frogs, because fishing gear is used to catch bullfrogs and you might catch a fish in the process. Eggert uses a bobber-hook combo on a fishing line and usually has a grasshopper for bait. “Most of the ponds and marshes along the Wasatch Front contain bullfrogs. They breed from late spring through early summer, during which time you’ll hear males call together in a chorus. Bullfrogs are typically green or grey-brown with brown,” he said.

How do bullfrogs taste?  “I think they taste like chicken, but a little chewier. Others think they taste like fish. So, if you like chicken or fish like I do, you’ll love the taste of frog legs,” Eggett said. His favorite method of cooking is to roll the frog leg in buttermilk, then a breading mix, then deep fry them in oil. For more tips on catching and cooking bullfrogs see the link on the DWR website: https://wildlife.utah.gov/news/wildlife-blog/628-how-to-catch-and-cook-bullfrogs.html

Summer to be full of art and music in Lehi