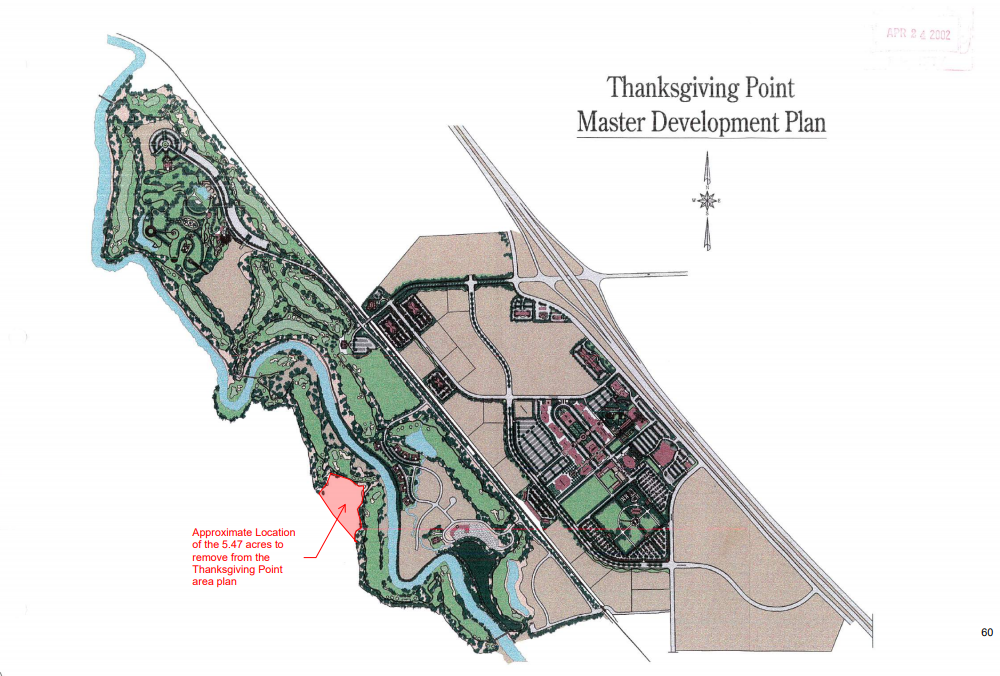 Trane Engineering requested approval of the Thanksgiving Station Phase 2 concept, a 37.95-acre development at 1900 West Ashton Blvd after the request was tabled at the April 25 meeting. The concept includes three office buildings, a basketball court, an outdoor plaza, and a parking structure. The item was tabled in April because the results of a traffic study in the area were not finished at the time and members of the Planning Commission agreed that the traffic issues in the area had to be resolved before they could approve more building.

Andrew Bybee from Stack Real Estate assured the Planning Commission that amendments to the Area Plan will handle the traffic load on the roads for the new project. Residents questioned the validity of the traffic study, saying there will be a greater impact on the roads surrounding the Resort Community zone than there will be within the Thanksgiving Point area.

“We have to plan and leave an hour ahead of time just to get to the Legacy Center, which is 10 minutes away from our house. Developers are not interested in the well-being of residents. They build and leave the mess behind for us. Listen to the residents of Lehi! You’re always behind on traffic and infrastructure,” said Shalom Chapman, a resident near the proposed project at Thanksgiving Point.

“Doing a traffic study is not enough, we need to do something about it. Not enough has changed with this concept plan. We should address the issues and keep addressing them until we get it right,” said Nate Canen, a neighbor to the acreage in question.


“I represent a different demographic. In light of the traffic concerns, we have taken to scheduling all our heart attacks and strokes between midnight and 6 a.m. Public safety is a real concern; can we get an ambulance in and out of there at peak times?” asked David Nelson, a resident of the Thanksgiving Point resort community zone.

Andrew Bybee responded to the public input, “We appreciate the comments and feedback. There were two traffic studies done, one within Thanksgiving Point and one the City did of the surrounding area. A solution will need to be crafted by all the different groups involved.”

Members of the Planning Commission asked Bybee and other representatives of the project why they came back so soon with a similar plan to the one they presented on April 25. “Nothing has changed since we tabled this. This was never a Resort Community; it was office buildings with a golf course. They’ve missed the mark on Resort Community from the beginning. I get that it fits the letter of the code, but it doesn’t fit the intent,” commented Abram Nielsen of the Planning Commission.

“It’s worrisome to me that we’re looking at concepts when traffic issues haven’t been addressed. If we deny this concept the applicant has to wait a year before bringing it back, or make substantial changes,” said Matt Hemmert, Planning Commission Chairperson.

Bybee asked if he, as the applicant, should table the request once again, to which Planning Commission Member Brent Everett asked if it was fair to have the residents who have come to all the meetings to object to the proposal to keep coming back for the same item. Jared Peterson, a member of the Planning Commission, motioned to table the item until the staff and the applicant can review the traffic studies. The motion was passed unanimously.

Riverbend Management requested a review of the Traverse Mountain Area Plan amendment that was also tabled at the April 25 Planning Commission meeting. The request includes transferring 317 resident units from High-Density Residential (HDR) zoned land parcels in the Riverbend Planning District to land parcels in the Riverbend Highway Commercial area. They also requested the amendment allow for a 200-bed Assisted Living Center in the Riverbend Planning District. Matt Hemmert allowed two public comments by residents representing big groups even though it was not a public hearing item.

“This sets a density precedent in Traverse Mountain that is unacceptable. The traffic study is inadequate, it omitted the 30,000-square foot office building in the study. The open space triggers need to happen with the signing agreement, not ten to 15 years in the future,” said Rob Ludlow, representing 30 residents in the area.

“We realize this is a significant ask, but we’re also contributing a significant amount of land for a public park and the trail system will be a regional source of recreation. Our vision is to regrade and re-vegetate the land immediately and the developers in the area have plans to honor the open space just as soon as they know what’s going in there. We appreciate the public input, it makes our product better,” said Mike Batt of Riverbend Management.

“My opinion of this hasn’t changed, it’s great. Putting high density away from the hillside and near the road will avoid what’s happening at Thanksgiving Point. Density doesn’t create traffic, sprawl creates traffic,” said Abram Nielsen before making a motion to forward a positive recommendation for the request to the City Council. The members of the Planning Commission voted yes, with Matt Hemmert casting the only negative vote.

“The right number is 704. This request is a workaround. Ivory wants to buy this property without buying the residential development rights – those have already been sold to Stack. This is why Thanksgiving Point is overbuilt, all these requests for variances. The only protection left to the community is the zoning that is approved or not approved by the Planning Commission and the City Council,” said resident Jared Asbury.

Members of the Planning Commission agreed that giving a positive recommendation to Ivory Development would set a precedent they didn’t want to set. “I want to see a concept instead of just agreeing to take this piece out so they can do something with it. I have no reason to doubt the public comment that this is a workaround.”

A motion to give a negative recommendation to City Council on Ivory Development’s request to remove acreage from the Thanksgiving Point Area Plan was passed by a vote of three to two.

Ivory Development’s request for a zone change on the Dixon-Ivory property at 3200 North 300 West from TH-5 (transitional holding) to R-2.5 (intermediate density residential) was also given a positive recommendation by the Planning Commission by a vote of three to two. Before voting no, Matt Hemmert said, “Words matter. I think all the public clamor and people wanting to barbeque without flies has affected our ruling on this item. We’re getting away from the intent of the R-2.5 zoning completely.” Kim Struthers indicated that this is only the second time anyone has requested R-2.5 zoning in the city of Lehi.

The Planning Commission approved the clock tower option for Atlas Tower I, LLC’s request for a wireless tower located at 145 South 1350 East.