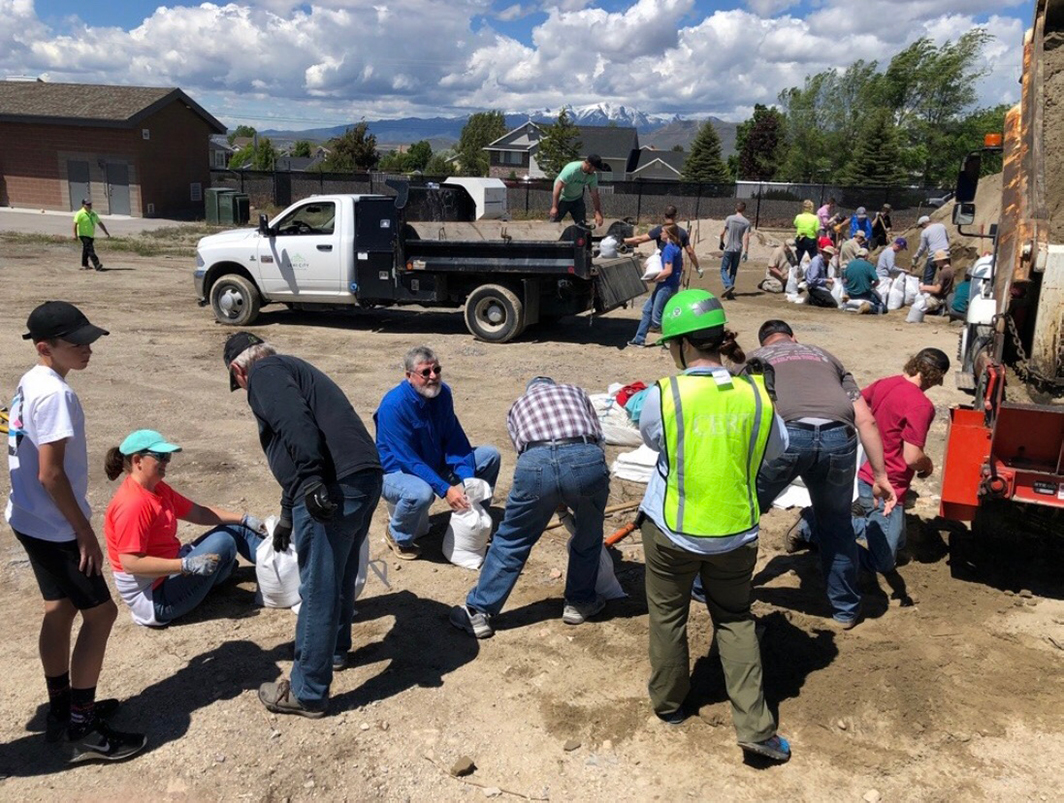 The potential for flooding in Lehi is extremely high due to a combination of three factors: saturated ground from the second wettest spring in history, exceptionally high snow levels, and cooler spring weather leading to snowpack levels still at high depths.

“We are preparing for flooding,” said Wade Allred, Lehi City Streets Superintendent. “We’ll finish making preparations this week and then it is a waiting game.”

“Ideally, we are hoping for the weather to be about 85 degrees for the daytime high temperature for the next few weeks,” said Allred. “At that temperature, the lower snowpack on the mountains will gradually melt during the day and then freeze again at night so that the snowpack runoff will be slow but steady. If the temperatures get into the mid-90’s, we are going to be in trouble, because the lower snowpack will melt as well as the mid-level and high levels of snow all at the same time. That potential runoff will be greater than what our waste ditches and creeks can probably handle. Our ditch capacity can only hold so much.”

“We are getting prepared for the worst-case scenario,” said Allred. “We have an immediate action plan and we are evaluating it daily if not hourly. That plan includes sand-bagging and the use of a barrier flood control system.”

The Lehi City Mayor Mark Johnson joined city crews and volunteers from the Community Emergency Response Team (CERT) and have filled about 10,000 sandbags over the past few weekends. In addition to the sandbags, the city recently spent $70,000 for 700 feet of a “Muscle Wall” system.  The Muscle Wall is a reusable water filled barrier flood control system that will be used to contain and divert flood waters away from the homes and a school in the possible flood area. The Muscle Wall was delivered last Wednesday afternoon and crews started to install the system immediately near the Lehi Elementary School and near houses in the area near Dry Creek and the waste ditch. The area around the elementary school–approximately from 200 West to Center Street and from 600 North to 900 North–has had flooding issues in the past and recently several homes were flooded during a recent rainstorm when debris and garbage blocked a storm ditch and caused flooding. (See related story)

According to Allred, the 700 feet of Muscle Wall is equivalent to about 55,000 sandbags. “We are in regular communication with the residents in the area that could be flooded, and we are giving them daily updates so they can prepare for the worst,” said Allred. Crews will be available to help residents place sandbags and city workers will help determine the best places to stack them. Sandbags are available for pickup at 439 W. 300 North or by calling Lehi City.

Lehi has had flooding problems in the past, it seems every 8-10 years we have been faced with flooding,” said Allred. “We are more capable of handling floods than in the past.” Over the past ten years, about seven miles of ditch improvements have been made to previously small and winding irrigation ditches in Lehi.  According to Allred, year-round, city crews are clearing and making improvements to ditches and creeks. It is important for residents to not throw garbage, lawn clippings, tree trimmings, or other debris into ditches. “We pulled out a 55-gallon drum, wood pallets, landscaping trash, and lots of other garbage out of a ditch that caused a blockage and then flooding of two homes a few weeks ago,” said Allred.

“We have better things in place to help regulate water flow, but the next three weeks are critical,” said Mayor Johnson. “There is a significant amount of snow still in the mountains, about 350% of normal. I can’t say that it is going to flood, but probably the chance is pretty high.”  The Mayor has distributed a notice to residents titled, “Hope for the best, prepare for the worst,”  about potential flooding in Lehi. (see the letter in related article)

“If we do get flooding, the sandbags and the Muscle Wall will help contain the water and minimize the damage,” said Allred.

“We get asked all the time, ‘Why can’t we just make the ditches deeper or wider? It is not that simple,” said Allred.   The city’s infrastructure [culverts, buildings, sewer, and power supply] would have to all be redone in order to make extensive improvements with the waste ditches.” The costs would be in the multi-millions, said Allred.

“People get a little upset when the city tells them they are going to have to remove trees or take part of their land in order to make such improvements,” said Johnson. “It is difficult to figure out a way to make improvements and keep everyone happy.”

“If you are in a potential flood area, it would be a good idea to get your stuff out of the basement and move it upstairs, ask us for assistance in placing sandbags and please make a phone call to us if you see or have flooding.  Safety is the most important, if you see anything in the ditch blocking or creating a problem, do not try to remove it yourself, please call us to do it.  If you have water going into your house, please leave switch your power breaker off, leave the house and call Lehi Fire Department,” said Allred.

To see if your home or neighborhood is in a potential flood area, the Federal Emergency Management Agency (FEMA) has recently updated the flood plain maps. See the following link and zoom into Lehi. https://www.arcgis.com/home/webmap/viewer.html?webmap=8603e2e8b6bb4e42b594fc458fd5c1b8&extent%20

“We want the residents to know we are here to help prevent flooding and are here to help if it happens,” said Johnson. To get updates about possible flooding, residents can follow the official website and social media accounts of Lehi City or call 801-836-1072. Sign up for alerts at alerts.utahcounty.gov.

“Hope for the Best, Prepare for the Worst.”

A letter from Mayor Mark Johnson about potential flooding

Please pay attention to the information I am sharing here. Currently, the snowpack for our area is 274 (now 348%) percent of normal. With the significant amount of rainfall we have been receiving combined with anticipated warming temperatures, I would like our citizens to understand the high opportunity for flooding along our waterways. For that reason, I would like everyone to understand what we have experienced so far and what we can do to prepare for additional flooding.

Early morning on Friday, May 17, our Public Works Department responded to flooding from the Dry Creek and Waste Ditch by Lehi Elementary School. Despite our best efforts to keep the channels clear of debris and track the rising water levels, the high temperatures of the previous two days followed by a rainstorm caused a large amount of debris to come down the creek.

Temperatures will rise dramatically in the next few weeks and the snow runoff will rush down the mountain, likely exceeding the capacity of the Waste Ditch and Dry Creek. There are several things that we can do, both as a city and community, to prepare.

First, the Public Works Department has sand and bags available now at their campus for homeowners who may be at risk of flooding. Residents are encouraged to call 385-201-1700, coordinate a pickup, and plan to fill and place sandbags along the potential flood zone. We will stockpile sand and bags for emergency purposes at the Power Department and Fleet Building near the rodeo grounds to avoid road closure delays associated with the I-15 construction project.

The biggest cause of flooding is the debris that blocks gates and storm drains. Public Works actively monitors and cleans water channels to avoid any issues. Residents can help by keeping channels clear of garbage and debris. Yard waste, tree clippings, and other waste should never be placed in the Dry Creek or Waste Ditch. Clean your gutters and the storm drains in front of your homes to allow rainwater to properly drain.

As temperatures warm, residents may be tempted to swim in or tube down the creek. It may seem like a harmless activity, but it can be extremely dangerous. The currents move fast and if you get trapped in a culvert or against a gate, it can be impossible to get out. Keep your animals and children away from the creek and avoid flood water.

Volunteerism is what makes our community thrive. If volunteers are needed to help prepare sandbags or clean up debris, efforts will be coordinated through our Emergency Manager. Volunteers must be 12 years or older, wear close-toed shoes, and bring their own shovels and gloves. Information will be made available through our social media sites and our emergency alert system. Sign up for alerts at alerts.utahcounty.gov.

As a city, we continue to make improvements to our infrastructure and emergency planning process to prevent future damage from flooding. The amount of moisture that we have received in the last year is remarkable and flooding may be unavoidable. Thank you for your cooperation and support as we prepare for its potential impact.