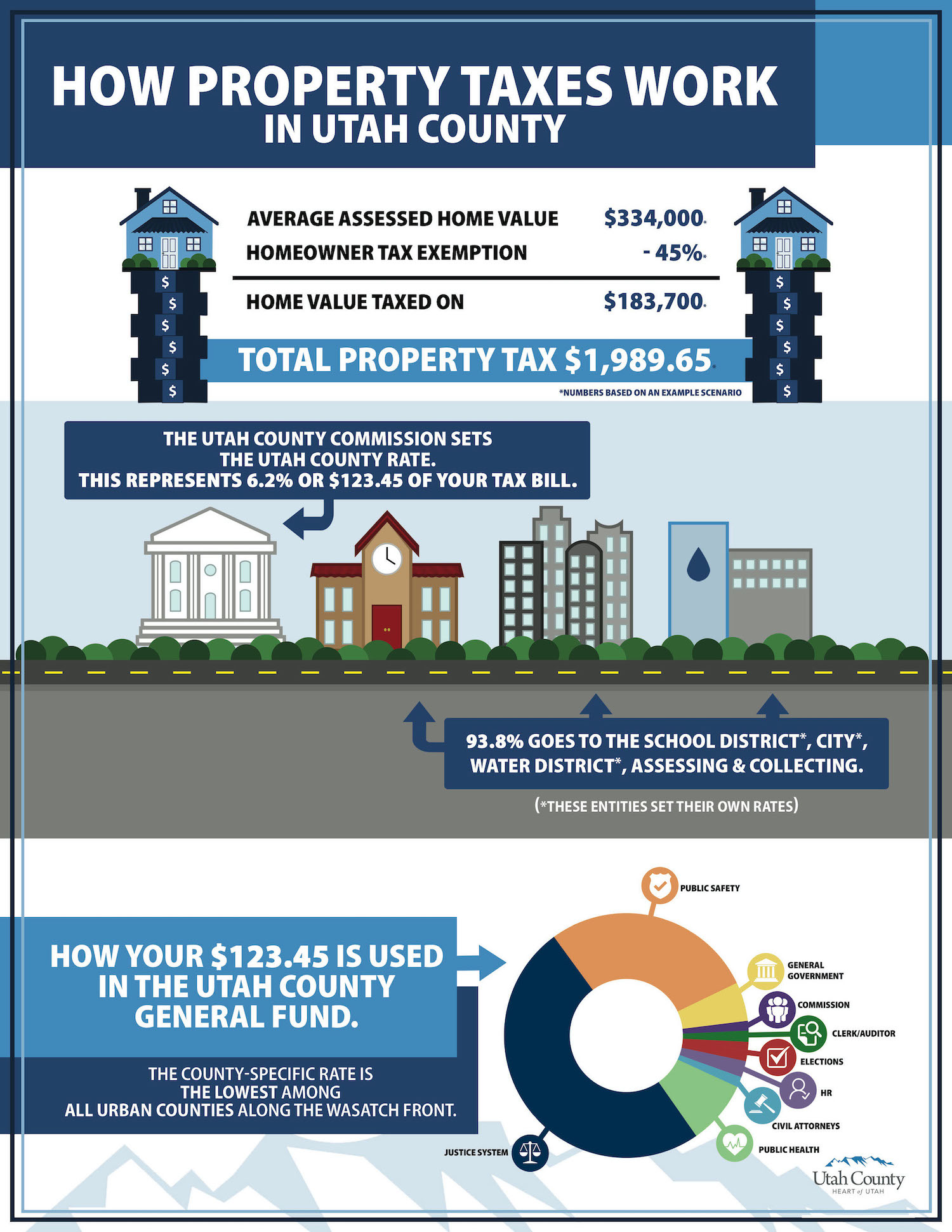 Utah County homeowners have recently received a “Notice of Proposed Tax Increase” postcard in their mailbox. The Utah County Commission voted 2-1 on October 8, 2019 to send the notice and begin the process of potentially raising the property tax rate from its current 0.000672 to a maximum of 0.0001344 (a 100% increase). The vote in favor of the potential increase was cast by Utah County Commissioners Tanner Ainge and Nathan Ivie, with Bill Lee as the dissenting vote against the increase.

The property tax increase is capped at 100%, but the Commission may elect to increase a lesser amount. “We wanted to set the cap with enough room, so we knew we had enough after cutting back quite a bit in areas we don’t need for next year’s budget,” said Ainge when he addressed common misunderstandings regarding the proposed increase.

Utah County’s General Fund revenue comes from three sources. Property taxes are the largest and most consistent portion of the county fund, along with sales tax and fees/fines (like marriage licenses, justice court fines etc.) The current General Fund annual revenue is $26.8 million.

The General Fund is used to fund the County’s:

Education, roads, and parks are not affected by this increase and will not receive any additional funding as they are not funded through the Utah County General Fund. Alpine School District is also preparing a bond for 2020, if passed, Utah County residents will see an increase.

So why the proposed tax increase? According to Ainge and Ivie, Utah County has had a steadily declining tax rate since 1985. Ainge described the problem by saying “Let’s say we bring in $30 million this year in property tax for the County. Next year, with property values increasing, if we don’t do anything as a Commission, that property tax rate automatically decreases, so that we only get that exact $30 million from the existing property owners.” When asked why the increase is necessary, Ainge said, “Over the last three years, the County has engaged in deficit spending; we’ve spent more than we’ve brought in.” Commissioner Ivie expressed similar sentiments and said, “Had we passed a smaller amount last year to curb deficit spending we would not be in this position. Deficit spending gets you further behind each year. Think about when you get behind on a bill how hard it is to catch up. That is the situation. We have had deficit spending for the last three years.”

What is the plan for allocating the increase in the general fund? According to the Commission, the proposed tax revenue will be split between three categories including:

“I am now working hard to get that number down with cuts, reduction and sale or elimination of underutilized assets,” said Lee. All of the Commissioners have expressed a commitment to look for ways to cut costs to make the proposed increase less than the maximum 100%.

A public hearing on the matter will be held on December 11, 2019 at 6 p.m. in the Utah County Administration Building (100 East Center Street in Provo). The Commission will decide on the tax increase at the conclusion of that meeting.