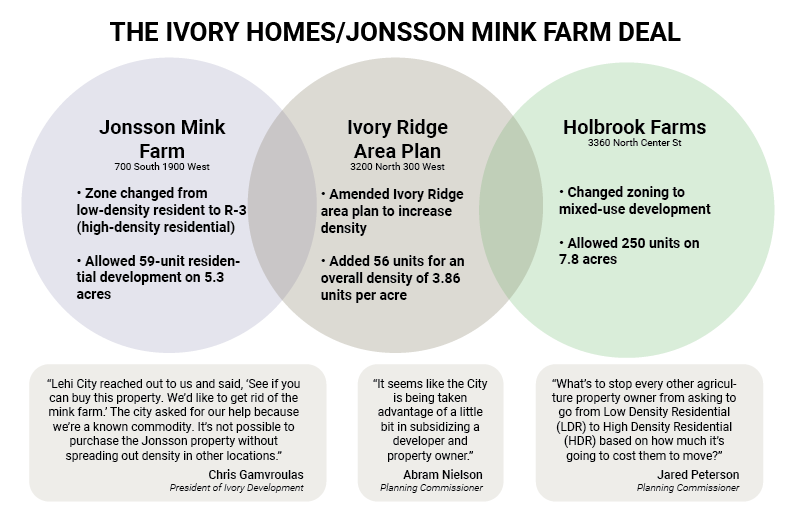 The Lehi City Planning Commission met on Thursday, February 6, for a work session followed by a two-item agenda, Ivory Development’s request for a zone change to the Jonsson Park Towns property at 700 South 1900 West and the preliminary plat for the 59-unit residential development on the property.

The fate of the Jonsson property was hotly debated at the December 5, 2019, Planning Commission Meeting with a dozen Lehi citizens, including then-City Council Member-elect Katie Koivisto, objecting to the multi-faceted deal Ivory Development proposed. In addition to the 59-unit development at the Jonsson property, Ivory requested amending the Ivory Ridge Area Plan, adding 56 units for an overall density of 3.86 units per acre, as well as a concept for a mixed-use development of 250 units on 7.8 acres at approximately 3360 North Center (Holbrook Farms). At that December 5 meeting, Chris Gamvroulas, President of Ivory Development, said, “It is not possible to purchase the Jonsson property without being able to spread out density in other locations. If it was possible to make something work there, the City would have done it already.”

The Planning Commission eventually sent a negative recommendation (a vote of five to two) for Ivory Development’s request to the City Council on December 5. Commissioners were hesitant to set a precedent for the City to essentially subsidize a developer or property owner’s project. Even with the Planning Commission’s negative recommendation, the City Council unanimously approved Ivory Development’s proposal on December 12.

Brad Mackey represented Ivory Development at the February 6, 2020, Planning Commission Meeting. The zone change, from TH-5 (Transitional Holding) to R-3 (high-density residential) was given a barely passing positive recommendation, with a vote of four to three. Mackey then presented the Jonsson Park Towns Preliminary Plat, a 59-unit multi-family subdivision with 11 units per acre on the 5.3 acres to the commissioners.

Commissioner Jared Peterson asked if the open space requirement was met and a Lehi City staffer responded that most of the open space in the development is in trails surrounding it. Mackey pointed out that Ivory Development made changes based on Commissioner Abram Nielson’s suggestions, including more sidewalks and better access to the trails after Nielson wondered if the City required any low-impact development where bigger areas of detention could be utilized as opposed to slope-side and unusable green space.

“I know the school district wasn’t concerned about adding students to Snow Springs Elementary with this development, but I’m concerned about the speed of traffic on 1700 West, which is already a problem. With two cars per unit, you’re adding a lot of cars to that road,” said Thad Pinkerton, a resident in the area. Pinkerton also asked about fire safety and current water availability. Mackey responded that the design meets the requirements for fire safety and water, and Lehi City’s Ross Dinsdale gave an update on road improvements to 700 South to mitigate traffic.

During the work session before their regular meeting, the Planning Commission discussed how to regulate the Neighborhood Commercial Zone, a relatively new designation for Lehi City. Staff members presented four ways other Utah cities have regulated Neighborhood Commercial; lot size, building footprint, lot coverage, and building height. Commissioners discussed specific requests that have come before them over the last year but did not make specific changes to the zone requirements.

In their discussion of ADUs, Lehi City staff said the cost of a short-term rental is $300 with a potential yearly income of $15,300 (if the room is rented 180 days of the year) while an ADU costs $4,553 with a potential yearly income of $16,200. The City has received no money for ADU permit fees since the price went up in August 2019. Commissioners agreed that the ADU fee is too high. Kim Struthers, Community Development Director, said the City may lower the fee for a period of time to give residents a chance to be complying.