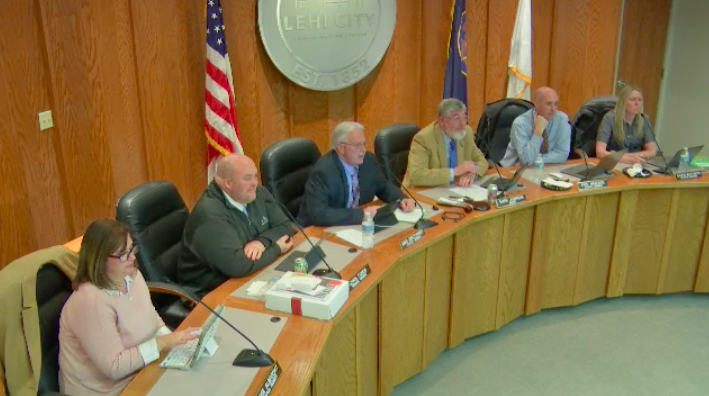 The Ivory agenda items didn’t move forward without challenge as Lehi resident Thad Pinkerton expressed his dissatisfaction with the project, stating that the trail system addition doesn’t make up for the lack of amenities. “I feel like we are being taken advantage of,” said Pinkerton.

Brad Mackey, Director of Development for Ivory Homes, responded to the resident’s concern about amenities, “Our obligation also includes securing the rights to have the trail and transfer the easement from the Jonsson’s to the trail. I have to buy the right from Rocky Mountain Power at the appraised value. So, it is more than just laying the asphalt and road base down,” said Mackey.

Councilwoman Katie Koivisto shared her disapproval of the deal, “I think this is really shady and inappropriate and I’m embarrassed by it,” said Koivisto.

When reached for comment after the meeting, Koivisto elaborated on her accusation,

“By agreeing to this deal, the city of Lehi allowed a developer to artificially inflate the market, by creating an outlier in property sales of nearly $1,000,000 an acre. If the developer was not able to produce stand alone profits on the land by means of the requested asking sales price, then the developer should not have purchased the land for said price. By having the city step in to “help aid” the purchase of the Jonsson property by increasing density in two areas of Lehi, they aided (in my opinion) the irresponsible decision that created that outlier. Mix that with the red tape that surrounds the swift push for removal of mink farms in Lehi, and you’ve placed a sour taste in some residents’ mouths,” said Koivisto.

“At a recent city council meeting, in denouncing the City’s approval of the Jonsson Park Towns project, Council Member Katie Koivisto stated that, “I think this was really shady and inappropriate and I’m embarrassed by it.”

The City takes these types of allegation very seriously. A review of the application process reveals that the application went through three different levels of formal review: one at the city staff level on November 20, 2019, one at the Planning Commission on December 5, 2019, and then finally on December 10, 2019, when the city council voted unanimously to approve the application. Ten days before the Planning Commission meeting and according to noticing requirements, city staff sent a public notice to residents within 300 feet of the project and posted a sign on the property.

While the City understands that council members will have strong policy disagreements from time to time, those policy disagreements should not cast shadow on an otherwise valid and legal process. At every stage of the process, the City complied with applicable statutory public notice and open meeting requirements.”

The Lehi Free Press and Lehi City does not have verification regarding the purchase price or details of the Ivory Homes/Jonsson property transaction.

In the City Council meeting last Tuesday, the first vote was to ratify the development agreement between Ivory Homes and Lehi City. The agreement was unanimously approved, although Councilwoman Koivisto noted that she was, unfortunately, voting “yes” because Ivory was following all codes, despite her opposition to the project.

The second vote was to change the zoning from TH-5 (transitional zone) to R-3 (high density). This was a formality vote, as the Council voted to amend the General Plan in December to accommodate the zone change. The vote was 4-1, with Koivisto dissenting.

The third vote surrounding this project was to approve the preliminary plat plan for the 59 townhome units. The City Council and the public had already seen the plan several times. The vote was 4-1, with Koivisto dissenting again.

At the beginning of the meeting, Cameron Boyle, Lehi City Assistant City Administrator presented an award to David Kitchen, Human Resources Director, and his staff. “The Lehi Human Resources Department was recognized by Gallagher. They conduct a benchmark survey every year and Lehi was recently recognized with a Certificate of Excellence for achieving best in class performance for Human Resource Management,” said Boyle. Lehi City was the only municipality human resource department to win in the state of Utah.

Each City Council meeting includes a public comment time allotted to residents to address the City Council or staff regarding an issue not included on the meeting agenda. On Tuesday, Lehi resident Susan Davis approached the podium to share her concerns regarding suspected mold in her old apartment.

“I’ve been to the health department, police department, city inspector and it goes on and on,” said Davis. She said her apartment was being taken over by suspected mold and it had forced her and her family to move out, after receiving no assistance from the apartment owners to mitigate the issues. Davis said, “I lost over $5,000 in clothes. We lost everything.” She displayed photos of the suspected mold in closets, on walls and even brought in several cookbooks to show the Council.

Councilwoman Katie Koivisto explained to the distressed resident that the City wouldn’t be able to intervene with her situation but said, “I just want to say, what has happened to you is horrific and I absolutely 110% think they need to be held liable for it. Stepping aside from a Council member’s point of view, if I was a neighbor encouraging you, I would say get a lawyer and fight this.”

When asked what kind of lawyer she should pursue, Mayor Mark Johnson suggested a different starting point for Davis, stating, “My first call would be to one of these agencies that go in and deal with mold, they generally understand where it’s coming from and what the typical sources are, I would talk to them first.”

Davis and her family have since moved into a new home in Lehi.

The Mortimer family, being represented by Dan Ford, requested a General Plan amendment for 3.09 acres located at 225 South 600 East. The request was to move the property from low-density residential to high-density residential for a 36-unit townhome project. “This is an ideal high-density location because of the walkability to Macey’s and the proximity to I-15 lowers the dependence on residential roads,” said Ford.

Ford hosted a neighborhood meeting before the City Council meeting to solicit feedback from neighbors and help to answer questions from area residents. Mayor Mark Johnson and Councilman Paul Hancock attended the meeting. “It was one of the best neighborhood meetings that I’ve ever had,” said Ford. He continued “We were able to answer a lot of questions. I would love to tell you that everyone walked away with some kind of consensus, but it wasn’t [the result]. There were close to 30 people in this family room. I think it was a great informative session.”

Councilwoman Koivisto started the Council comments. “With where this is located, with the R-1 zonings that are around it, I just don’t understand how people can think this is ok,” said Koivisto.

During the public hearing, Emily Mortimer, the property owner, expressed her previous opposition to new development and changes around her, but offered a new perspective, “Some of those changes that have come have brought people to my life and influences to my children’s lives that they wouldn’t have had otherwise and I have appreciated that.”

Skyler Barry, another neighbor, was supportive of the proposal and requested that his property also be included in the high-density zone change, “we are hoping to be a part of it,” said Barry.

All four residents during the public hearing expressed support for the project, with one neighbor, Judy Evans’ support being contingent on her property be protected with a fence and a revised entrance location away from her bedroom window.

After the conclusion of the public hearing, Councilwoman Paige Albrecht addressed Councilwoman Koivisto, “It’s easy to fall into the line of thinking that the people who come here are just developers looking to make an extra buck. I think for some that may be true and they are business people and that’s their right, but also the land that most of our houses sit on was originally owned by longtime Lehi residents like the Mortimers, who have seen their community evolve, grow, and adapt into something they maybe didn’t ask for and they would prefer to go somewhere else.”

Albrecht continued “I look a little bit past the developer and look at the person who is the current property owner and what possibly their motivation may be.”

Koivisto responded “I’m not against growth, I’m not against development. What I am against, is when developers come in and, in my opinion, rape the land.” She continued “I don’t feel that the zones that are around this relate to what is wanting to be brought in right now.”

Councilman Hancock explained his support for the project saying, “I think it does actually provide a transition from the Macey’s, Jack & Jill and Blender Bottle, especially with the other property owners to the east of this expressing a desire to convert to high density. Most of those homeowners are going to shoot off on 600 east and they will continue down 200 South to Pioneer Crossing or right at Main Street to get on I-15. This is as close to freeway access as you can get without driving through residential neighborhoods.”

Hancock concluded “Dan, I want to give you credit for actually initiating the neighborhood meeting in advance because a lot of times developers are willing to do that but it’s after hearing resident complaints. You went well beyond what are public notice requirements are, kudos to you.”

Councilman Chris Condie motioned to approve the zone change, which was seconded by Councilwoman Albrecht. The motion passed 4-1, with Koivisto dissenting.

Consideration of Approval for Revisions to the Madison Meadows Plat A & B for additional lots in lieu of improvements. By Bob Strang. Unanimously approved.