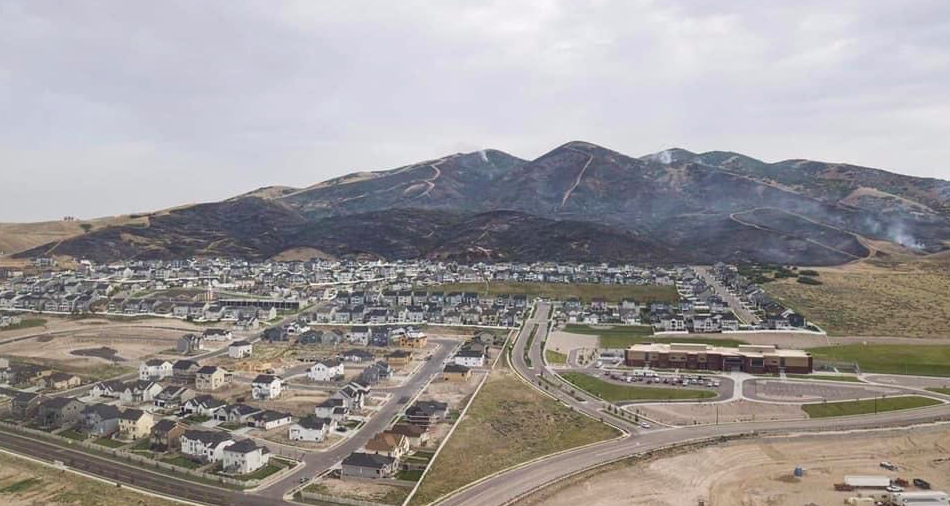 Lehi experienced a scary start to firework season on Saturday, June 27, with a fast-moving fire that engulfed the Traverse Mountain mountainside on a windy summer night. Nearly 500 acres were scorched as a result of the blaze.

The fire, named the Traverse Fire by state fire officials, started about 11:30 p.m., and came within a few feet of homes in Lehi’s northernmost neighborhoods. Residents within a quarter-mile radius of Vialetto Way to Annuvolto Way and residents on Autumn Hills Boulevard and Spring View Lane were all under evacuation notices from Saturday evening into Sunday morning.

The fire, started by five teenagers with a roman candle firework, was met with perfect conditions for a firestorm as winds exceeded 20 miles per hour on the dry mountainside. The fire was rapidly moving toward homes, but it died down overnight as the winds slowed, and a slight rain moved in, according to Lehi Fire Chief, Jeremy Craft.

The fire response required the assistance of fire protection agencies from all around the Wasatch Front. In total, multiple fire departments and over 200 resources including helicopters, water tankers and bulldozers aided the effort. The fight lasted into Sunday morning and ultimately was 100% contained by Monday afternoon, according to Chief Craft.

In his Sunday press conference, Craft emphasized that the 467-acre fire could have been prevented. Fireworks are only allowed in Utah between July 2-5, and all fireworks are banned near Traverse Mountain year-round.

“Fireworks were being used outside the window set by state law. That is a prohibited area for fireworks in Lehi City. Honestly, we felt like we did a good job of letting our citizens know and helping them understand the dangers. It is unfortunate that this incident happened. It caused a lot of people a long sleepless night,” said Craft.

As of Monday evening, the five teen suspects accused of starting the fire have not been charged with any crimes, although the case is under review for potential charges. The teens also face the possibility of providing restitution for the firefighting cost, which Chief Craft said exponentially increased due to aerial support and fire-fighter overtime pay.

“That can easily total a million dollars,” said Craft.

Throughout the weekend, the call for safe firework use was repeated from city and state officials urging residents to exercise caution. Governor Gary Herbert toured the damage with Lehi City Mayor Mark Johnson on Sunday and asked residents to take precautions with the upcoming 4th of July holiday.

“This isn’t the time to fool around and put lives and property in danger. It takes very little to start a fire,” said Herbert.

With Lehi experiencing its biggest fire disaster in recent memory, emergency preparedness was on display. The City successfully notified residents through a reverse 911 call, posted updates for residents on City social media pages, and smoothly set up an evacuation site at Skyridge High School, operated with the help of Lehi’s Community Emergency Response Team (CERT).