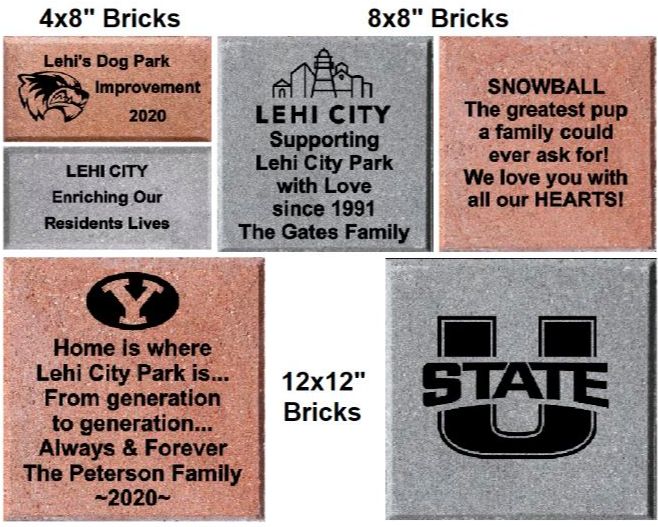 Lehi City officially started a 50-year lease of Willow Park from Utah County on July 1, and now dog citizens of Lehi can be immortalized in brick pavers at the dog park within Willow Park. The engraved pavers are a fundraiser by the Parks, Trails, and Trees Committee to finance the project without using taxpayer money. (To purchase a brick paver at the dog park, go to https://polarengraving.com/lehiparkstrailsandtreescommittee.)

“The new dog park will have a water feature, separate areas for big and small dogs, it will be fenced in. The most frequent request from residents is a dog park in Lehi, and this is going to be a good one,” said Skyler Beltran, chair of the Parks, Trails, and Trees Committee, an advisory board for the Parks Department, appointed by Mayor Mark Johnson and approved by the City Council.

In 2012, American Fork resident Parker Wimmer worked with Utah County to build a dog park in Willow Park as his Eagle Scout project. Fourteen-year-old Parker spent dozens of hours raising money at booths in front of grocery stores, visiting Salt Lake area dog parks, and working with John McMullen from the Utah County Public Works Department. Wimmer got the idea from his father, Eric Wimmer, and their family beagle, Max. He hoped another Eagle Scout would follow in his footsteps to make more improvements in the future, but the dog park fell into disrepair over the last eight years, along with the rest of Willow Park. “I’m happy to see Lehi City invest resources into the dog park after all these years,” said Eric Wimmer.

“This is a great starting project for our committee. Residents who are passionate about this dog park can directly contribute,” said Beltran.

“Mayor Johnson and staff have worked hard to lease this property at very low cost to taxpayers, but there simply isn’t enough funding to build it right now, unless people are willing to help out with contributions,” said Lehi City Councilwoman Paige Albrecht. “Checkers and I can’t wait to see our brick installed!”

The engraved brick pavers will line the walkway around the dog park. Beltran hopes to also work with local businesses to fund the dog park improvements.

“The goal of the Parks, Trails, and Trees Committee is to find small projects like this and improve on amenities that Lehi already has,” said Beltran.