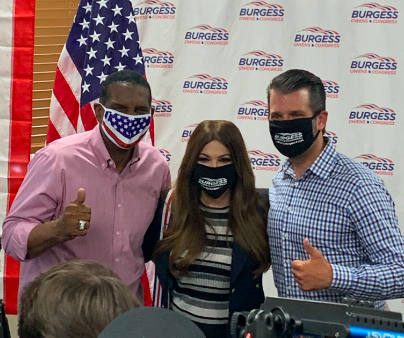 Donald Trump Jr. and girlfriend, Kim Guilfoyle made a campaign stop in Utah on Thursday. The two were visiting to show support for recent primary election victor, Burgess Owens. The stop by Trump Jr. is an introduction to what will be a hotly contested congressional race with National interest.

One of the day’s events included a small gathering of Owens volunteers at Colonial Flag in Sandy, where Trump Jr made brief comments and then toured the flag manufacturing facilities.

The small gathering of masked supporters opened with a comment from Owens, who acknowledge the challenge ahead in facing the first-term Democrat incumbent for Utah’s 4th Congressional District.

Owens then introduced Trump Jr and Guilfoyle to applause from the crowd.

“I come back here every year. Usually for fishing, hunting, friendships and just everything you have around here. It’s awesome to see someone like you, Burgess. To step up and be fearless, to be a pioneer and say what needs to be said and do what needs to be done despite the resistance that you’re going to get as a conservative. It’s truly awesome to watch,” said Trump Jr.

“You are taking yourself out of a comfortable life and getting into something almost, if not, more vicious than football,” added Trump Jr. Owens formerly played for the Super Bowl-winning Oakland Raiders from 1980-1982.

Trump Jr. concluded his statements, “A house with guys like Burgess in it will get things done. We had the house and we had the senate, but we had weak leaders. We squandered that opportunity and we can gain it back. We can gain it back with guys willing to fight. I am excited to support you to the fullest, Burgess, and it’s just an honor to be here.”

The President’s oldest son traveled to a fundraiser in Spanish Fork before concluding his Utah visit at the Spanish Fork Fiesta Days Rodeo to celebrate the Pioneer Day Holiday.

Before the day’s festivities, Trump Jr. acknowledged Utah’s July 24 holiday. “I want to highlight the Trumps’ commitment to preserving American Freedoms and values held by members of the LDS community. The LDS faith has contributed to shaping this nation through their pioneering spirit.”