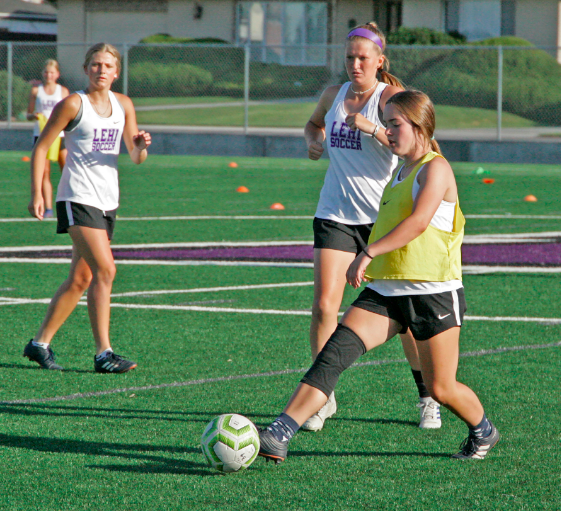 The Lehi High School girls soccer team has begun the fall campaign healthy, experienced and eager to make some noise in the 5A ranks.

“I’m really encouraged about where we are with so much club soccer having been shut down in the spring,” said coach Tim Graham. “The girls continued to do their individual workouts and improved their skills. It’s been awesome to see their resolve and focus this summer.”

It also doesn’t hurt that the squad’s core group has played together 2-3 years now and has great chemistry.

The Pioneers can rally around senior forward Kennedi Schmidt, a four-year starter and captain who led the team in goals and assists last season.

Graham said his varsity reserves are “young but experienced” and are well prepared to fortify the lineup.

Lehi finished third in Region 7 last year behind Timpanogos and Timpview but played both squads tougher the second time around. The Pioneers ended the season with a double-overtime, sudden-death loss at Bonneville in the state tournament.

“If we stay humble, keep working and respect our opponents, we’ve got a chance to do some damage in the region,” Graham said.

“Timpanogos is always talented,” he continued. “Alta was young last year but I consider them up and coming, and I wouldn’t count out Mountain View, either. Down south, Spanish Fork, Maple Mountain and Springville are all good.”

As for up north, the coach noted that Skyline won the title last year but had to beat the same Laker squad that the Pioneers found “physical and tough to play.” East always has a solid program as well.

Lehi was scheduled to open the season Wednesday night at home against Viewmont. They travel to Uintah Friday and welcome Cedar Valley on Monday.