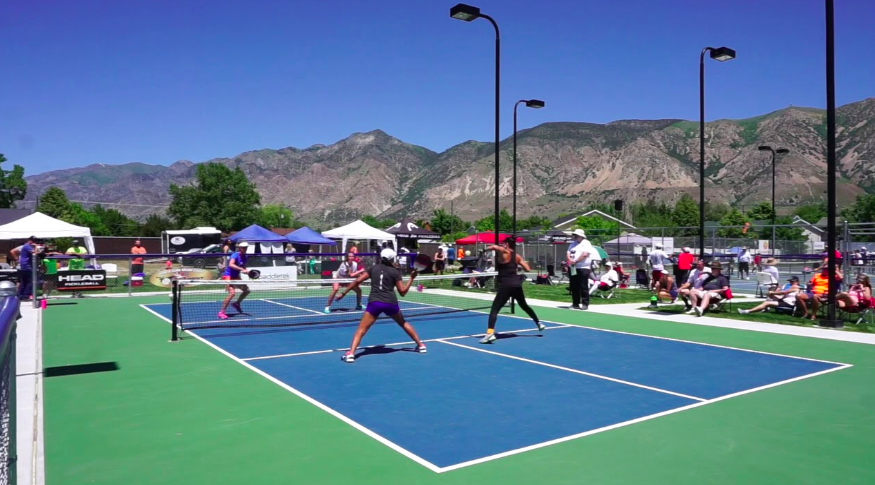 Pickleball popularity continues to rise across the Country and especially here in the West. The paddleball sport is played in singles or doubles and only requires a net, a paddle and a ball. The sports’ popularity can be attributed to the diverse populations who can participate, from children to seniors and everyone in between. The sport is also economical, with the average equipment cost less than $25.

Lehi resident Steve Carlton loves to play pickleball and is on a mission to bring a pickleball complex to Lehi.

“As the popularity of pickleball increases, so does the need for more courts. Lehi City has been presented a plan for a pickleball complex and we as pickleball enthusiasts need to get behind the City and make it happen.” said Carlton.

Carlton referenced previous efforts of Lehi resident Lori Le and Highland resident Chris Thackeray who presented a proposed plan for pickleball to the City Council in February. The proposed complex would include 24 courts and need four to six acres. Le and Thackeray estimate the cost to build would be approximately $1,175,000, with annual maintenance costs of $48,000. Thackeray also expressed that he has received the support of several residents who are willing to donate materials and funds to the project.

“Lehi has a lot to offer in every aspect. Lehi is right in the middle of pulling pickleball players from Salt Lake City and the southern part of Utah County,” said Carlton.

In the February City Council presentation, Steve Marchbanks, Lehi City Parks Director said, “I think we have the potential for three or four different locations, maybe Mellor-Rhodes, out in Ivory Ridge or even the north side of Peck Park.” Lehi City also just acquired an additional 17 acres to increase the size of Peck Park.

When asked how the push for pickleball effort is going, Carlton said, “Everyone that I have talked to in the city has been very positive. I haven’t talked to all of the Council [members] but the ones I have talked to seem very supportive in this matter and feel that there is a great need to have a pickleball complex here in Lehi.”

Carlton not only sees a potential pickleball complex as a win for resident recreation but also as a financial gain for the City tax base through tourism.

Adamson shared a sample economic impact calculation, using a tournament that Brigham City, Utah was to host for five days in May, also mentioning that the tournament was already sold out three months in advance with 828 registrants. “An event like that in our area would have an estimated economic impact of $414,000,” Adamson said. “That is a regional tournament and there is potential for national tournaments if a 24-court complex was built in Lehi. It would be the largest complex in the state, even bigger than St. George’s.”

Currently the largest complex in Utah County is a 16-court facility located in Spanish Fork.

When asked if Carlton has a financial plan to fund the requested complex, he said “We don’t have a financial plan together yet. First, we need to be certain that pickleball is coming to Lehi.” Carlton concluded by asking other members of the community to help join his effort in bringing a pickleball complex to Lehi.

“We would like residents to email the Council members and the Mayor and let them know how much we would like a first-class facility here in Lehi. If you have played any pickleball in town then you know how hard it is to get on a court. There is a lot of waiting around to play.”