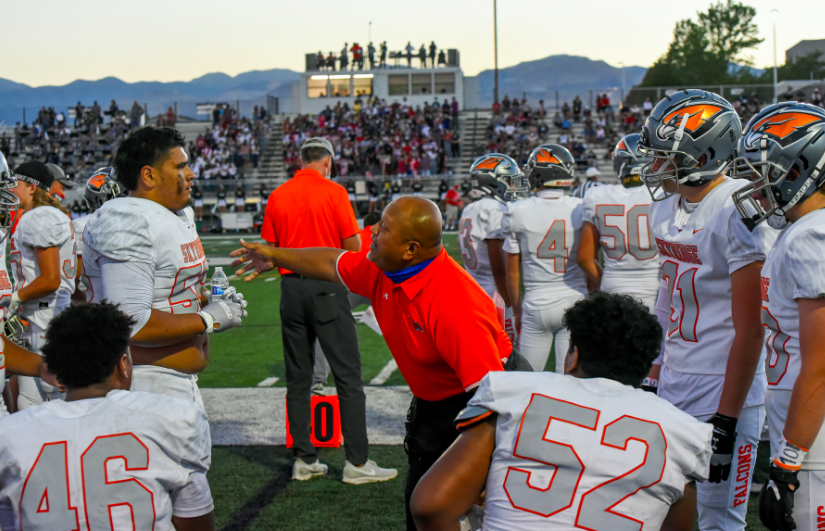 The Grizzlies had just four fewer plays and held the ball more than six minutes longer than the Falcons, but they hurt themselves with fumbles and penalties and only managed to tally seven first downs in the contest.

The Falcons executed ably in all three phases of the game, providing further justification for their top-five state ranking and thus keeping themselves in the conversation as a true state contender.

On offense, sophomore quarterback McCae Hillstead continued his impressive season as he rushed for two touchdowns and threw for two more in the first half of the game. He completed 17 of 21 passes (81%) for 166 yards using five receivers.

The offensive line continually opened big holes for junior running back Jeter Fenton and provided stellar protection for Hillstead in the passing game.

The Falcon receivers were consistently open and Hillstead’s aim was deadly as senior wide receivers James Palmer and Mitch Adamson both snatched the ball for touchdowns of three and 11 yards, respectively.

Fenton and freshman running back Trey Syddall each got 2-yard ground scores to account for the two other touchdowns.

Skyridge head coach Jon Lehman said, “It was a really well executed first half offensively and defensively. I felt like on our first four drives offensively, we were really clicking and executing at a high level.”

“Defensively we were really physical up front. We knew they were going to try and run the ball against us and we really stopped their interior run game from the start,” said Lehman.

“We pushed them to run the ball to the perimeter, we shut that down and turned it into a game that they felt like they had to throw the ball which was to our advantage.” He added, “We are leaning on our depth and trusting everybody in the program to be okay for the win.”

Buck said, “I have been focusing in the weight room every day. I don’t miss a practice because you practice as well as you play.” He added “We performed great tonight. We came in, dominated from the start and shut them out. We play like a team and we win as a team and this was a good win.”

Skyridge tennis off to good start