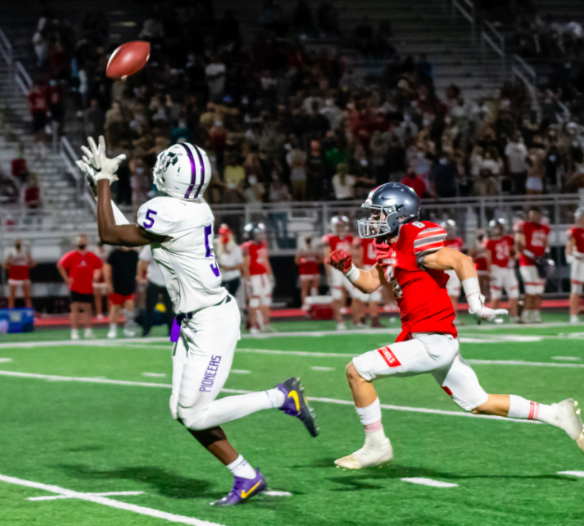 The Lehi football team made a fast start, struggled, but then finished strong to earn a 40-14 victory at Mountain Ridge to open Region 7 play on Sep. 4.

The Pioneers are on a 3-game winning streak.

The Sentinels received the opening kickoff. Pioneer senior defensive back Bode Hinckley intercepted a pass on the first drive of the game, giving the ball to the offense at the Lehi 37-yard line.

Seven plays later, senior running back Chandler Jenkins capped off the drive with a 15-yard rushing touchdown. After the PAT by senior kicker Carson Weber, Lehi was up 7-0.

Mountain Ridge scored on a 74-yard drive early in the second quarter. After a missed PAT, the Pioneers led 7-6.

The remainder of the period consisted of the teams trading punts and interceptions. Lehi sophomore defensive back Kadiyon Sweat intercepted the ball at the Pioneer 25-yard line with 33 seconds left in the half, shutting down any Sentinel scoring opportunity.

After receiving the kickoff to start the second half, Lehi marched down the field and scored on a quarterback keeper.

Senior quarterback Creyton Cooper faked a handoff up the middle to senior running back Takeshi Faupula, took the ball around the left end and up the sideline for a 39-yard touchdown. After another Weber PAT, Lehi was ahead 14-6.

The lead did not last long. Mountain Ridge scored a touchdown only 2 ½ minutes later and, after a successful 2-point conversion, tied the game.

The Pioneers answered with a solid drive including receptions by senior wide receiver Isaiah Tauai and senior tight end Josiah Westover and strong running by Faupula. When the drive stalled, Weber booted a 31-yard field goal to put Lehi back in front 17-14.

The Pioneers owned the fourth quarter, dominating on both sides of the ball.

Not to be outdone, the Pioneer offense made some plays as well. Jenkins scored his second(6 yards), third (8 yards) and fourth (7 yards) rushing touchdowns of the night to complete the tally for the Pioneers. He finished with 10 carries for 83 yards.

Cooper connected with senior wide receiver Payton Faris on a 43-yard bomb to set up the second touchdown of the half.

“I think this game showed how we feed off each other, both sides making plays,” said Coach Ed Larson. “You can bury a team quickly when that happens.

“We have not had that consistently all year,” he continued. “It was good to get it going in the fourth quarter. We are going to need that for the schedule coming up.”