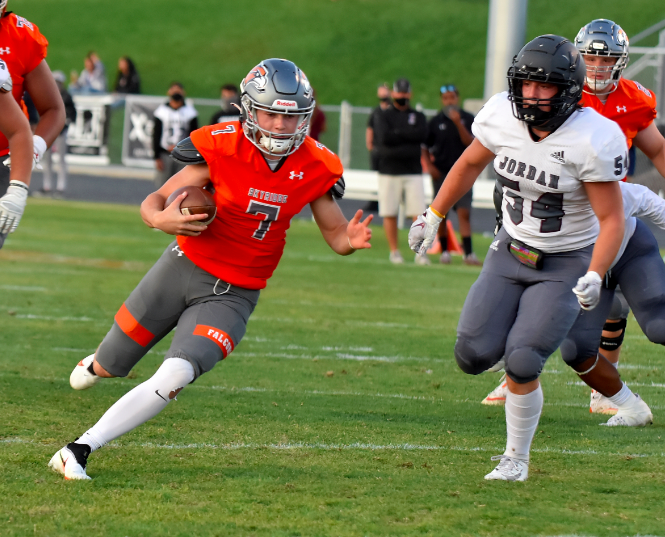 In a one-sided battle between two 6A teams, the Skyridge football team was up for the challenge, defeating Jordan 68-7 for Homecoming on Sep. 11.

The Falcons soared to an early 27-0 lead in the first quarter and added 28 more points in the second quarter as Skyridge sophomore quarterback McCae Hillstead passed for six touchdown and rushed for two more in the first half alone.

“McCae read the game well, he was super, super efficient and he finished 16 of 18. He was on target tonight and ran for a bunch of yards as well. James Palmer was really special in space,” he added.

Hillstead finished with 355 yards passing and 71 rushing. A senior wide receiver, Palmer had six receptions for 225 yards and four touchdowns, including a 96-yard catch and run that electrified the crowd and energized his team.

“The O-line had great push and our running back did a great job. I honestly think it was a great team effort overall tonight,” said Palmer.

He continued, “For the 96-yard touchdown it was a two-man drill. We knew we were going to have to come out fast. Coach Lira taught me before the game by telling me they would come out and cover zero and if I get a slot down the middle, I have to take (the ball for) a touchdown.

“That’s what we got and the QB had a great read and everyone did their job and I ended up scoring,” Palmer said.

Senior quarterback Cam McClellan accounted for 3 completions for 34 yards and one touchdown pass.

Falcon running back Jeter Fenton ran through gaping holes in the line for 82 yards and freshman Trey Syddall had two carries for 24 yards.

Lehman said, “Defensively, the front seven really played physical tonight and I loved what our safeties did for us.”

Senior safeties Sawyer Winward and Jackson Lambert made sure the Beetdigger receivers were covered throughout the entire game and senior cornerback TJ Ragigia locked down the outside.

Stewart said, “We played really well. We had good energy coming into the game and good focus with a good week of practice leading up to it. Defense just executed really well tonight. Our offense was just clicking and people were running good routes.”

This win puts the Falcons record at 5-0 going into region play. After a great preseason run, Skyridge will get tested in Region 4 as five out of six teams are undefeated so far in the most competitive region in 6A.