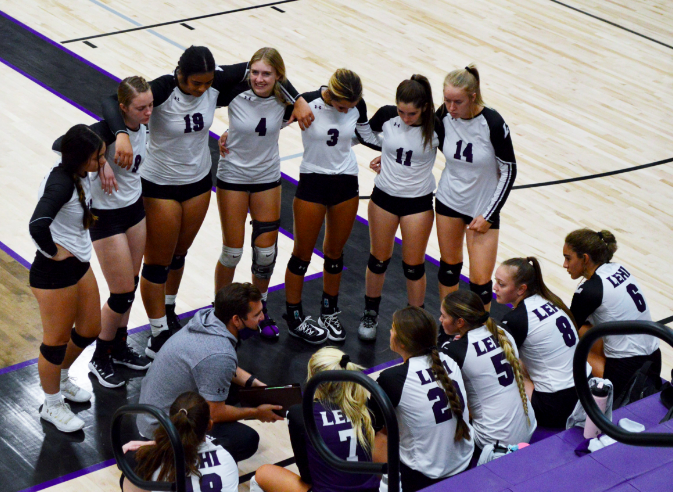 The Pioneers were scheduled to play Mountain View at home on Sep. 8, but the team from Orem is in quarantine. That match has been officially postponed, but the rematch date is unsettled.

Lehi’s RMCC slate started with the Pioneers facing Fremont. The team had the advantage of being on their home court, but were without the services of their leading player for the weekend.

The Pioneers looked strong against Fremont in the first set, winning 27-25, but they dropped the next two sets 24-26 and 10-15. The teams played the best of three sets in pool play on the first day.

Next, Lehi took on Kanab. The Pioneers got off to a 3-0 start, but Kanab quickly caught up to tie the score at five. An ace by senior outside hitter Haylee Holker followed immediately by a light touch kill by junior opposite hitter Millie Gibson threw the Cowboys off their rhythm and they never really got it back in the first set. The Pioneers won 25-15.

Coach Kolton Rader asked spectators who were sitting on rolled-up wrestling mats in the auxiliary gym to keep their masks on so they could stay and watch, and everyone quickly complied.

The Pioneers had a wobbly start in the second set against Kanab with several missed blocks at the net and serves going out of bounds. Lehi stayed in the game though, and back-to-back kills tied the score at 18.

Lehi played Bountiful in their final match in pool play, falling to the Braves 2-0 in close sets with identical final scores of 25-22.

The Pioneers were ranked at No. 12 out of the 20 teams in the RMCC, moving them into the Silver bracket on Saturday at American Fork High School.

They took on Timpanogos in a tiny, all-brick auxiliary gym. The Pioneers stepped up and worked together and bested the Timberwolves 3-0.

After a short break, Lehi was back in the gym to take on Desert Hills at noon. That contest went to five sets and the Pioneers were victorious 3-2.

The next opponent for Lehi was Union. Once again the Pioneers went five sets, but this time they fell 2-3 to finish out the weekend.