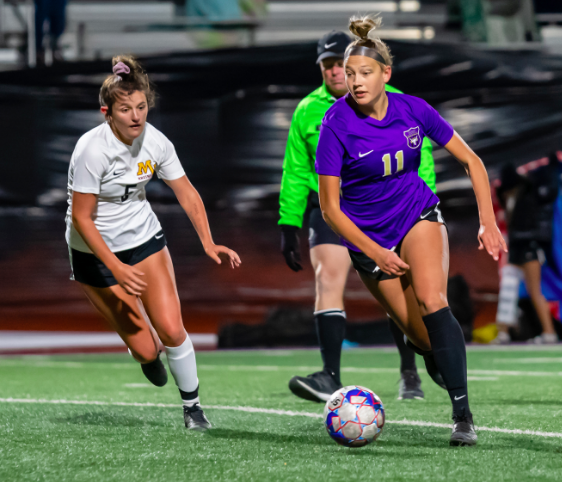 The Lehi girls soccer team recorded two more victories last week, defeating Mountain View 2-0 at home on Sep. 8 and besting Timpanogos 3-2 in an away game on Sept. 10. The Pioneers are on a four-game winning streak and are now alone on top of Region 7 at 6-1.

The night game against the Bruins was frigid and windy. At halftime, the temperature was 48 degrees with a strong north wind whipping through the stadium. Only the day before, the thermometer topped out at 90 degrees.

Neither team scored in the opening half and with the game approaching the midpoint of the second period, the freezing fans were frantic for someone to get a goal so the game would not go into overtime.

Lehi’s Calista Wren saved the night. The junior forward put the Pioneers on the scoreboard in the 58th minute. Wren intercepted the ball in the offensive third, found open space and then blasted a 30-yard shot over the Mountain View keeper.

Two minutes later, Lehi senior forward Kennedi Schmidt ran onto a pass from Wren and put the ball past the keeper to push the Pioneers ahead 2-0.

The Bruins had a good chance to score with eight minutes remaining when a forward ran onto a ball played to the top of the box.

Pioneer goalie Hayley “Jo Jo” Ogden read the play, came off her line to challenge, kicked the ball away from the Bruin player and covered it, preserving the fourth shutout of the season for the Lehi defense.

Coach Tim Graham commented on Ogden’s ability to shut down opposing players. “Jo Jo has been amazing. She has the ‘it’ factor! She is just mentally tough and keeps everything calm back there. We are literally in great hands!”

After losing to the Pioneers 3-1 earlier in the season, Graham’s squad knew the Timberwolves would be ready for their rematch.

Lehi freshman midfielder Erin Dahl (10) scored the first goal in the 22nd minute when she sprinted onto a ball at the top of the box and placed a low, powerful shot past the keeper.

Timpanogos tied the game at 1-1 with eight minutes remaining in the opening half.

Both teams played spirited soccer after the break. The Pioneers jumped ahead in the 65th minute when senior defender Katie Davis placed a missile into the back of the net from near the top of the box. The Timpanogos keeper could only watch as the line drive shot blew past her.

Five minutes later, Schmidt beat the keeper from nine yards out after receiving a pass crossed in from the sideline to the box by sophomore forward Sarah Ballard.

Although the Pioneers were up 3-1 with 10 minutes left, the game was not over. Timpanogos is a dangerous team and can score quickly. The Timberwolves did just that on a corner kick two minutes later.

During the final eight minutes of the game, both teams had shots on goal but were unable to find the net.

Lehi walked away with a victory. However, they lost an important player. Outstanding senior defender Claire Robbins went down with a season-ending injury in the second half. Robbins has been a starter since her freshman season and has been a team captain since her sophomore year.

“It’s hard to put into words what Claire Robbins means to our program. Her work ethic and commitment to Lehi soccer has been a driving force for the success of our program,” Graham said.

“She will be remembered far beyond her time here at LHS. She has set a standard of leadership that inspires all of us to follow on and off the field,” he added.

Although her skill on the pitch will be missed, Graham is confident that she will continue to inspire and lead the team.

Defeating Timpanogos twice in one season is a difficult task. “Sweeping a quality program like Timpanogos is huge for us. Not only does it help us in our battle for a region championship, it really helps our confidence moving forward,” the coach said.

“Honestly, these girls just proved that they know how to battle. Beating Timpanogos twice this year has shown us that we have a tough group of girls,” Graham concluded.