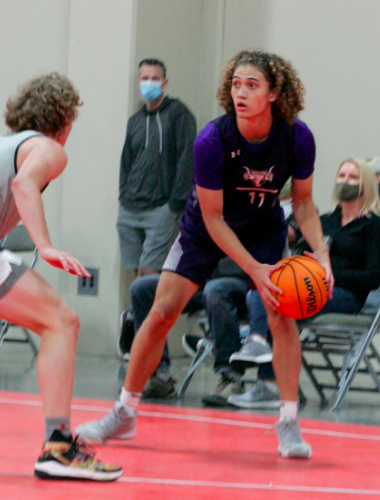 Lehi basketball senior guard Noa Gonsalves has committed to continue his playing career at Dixie State University in St. George. He informed the coaches of his decision on Sep. 28.

“I’m really excited for Noa,” said Pioneer Coach Quincy Lewis. “Dixie is getting a kid who has a chance to be a really good player for four years for them.

“Noa’s athleticism and his efficiency as a player really set him apart,” the coach continued. “Dixie is moving into Division I and it’s an exciting time for Noa to be a part of that program.”

Gonsalves said he’s been in touch with the Trailblazer coaching staff for some months and just felt comfortable making the decision now.

“I really like the coaches and the coaching staff and I think the players are awesome,” he said. “I’m looking forward to getting my official visit and meeting the guys. I’m excited to work with them.”

Gonsalves averaged 19.6 points, 5.1 rebounds, 2 assists and 1.7 steals per game last season and was named to the 5A All-State First Team by the Deseret News. He was an honorable mention selection as a sophomore.

During a summer schedule limited by the current health crisis, Gonsalves completed 56.2 percent of his field goals, 37.7 percent of his 3-point attempts and shot 95.2 percent from the freethrow line.

Gonsalves said he has only one goal for his senior season: to win a state championship with his team. He added that Lewis is helping him to prepare for both this season and his future collegiate career.

“Coach Lewis is very intelligent and very specific,” Gonsalves said. “If he sees something wrong, he’ll tell you straight up and show you how to fix it.”

Gonsalves is happy to have one aspect of his future settled. “I’m smiling really big right now,” he said.