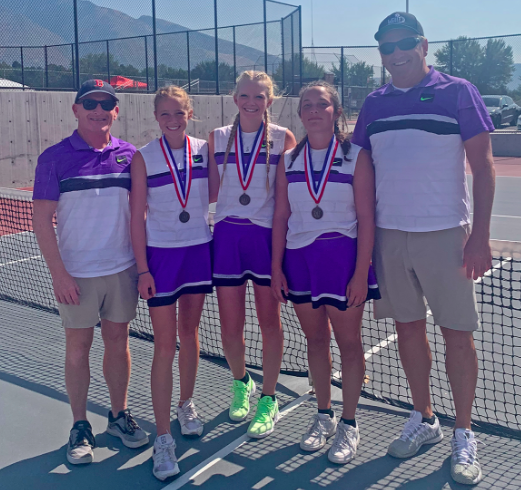 At the Region 7 tournament Sep. 24-5 at Mountain View, the Lehi girls tennis team qualified a player for each of the three singles brackets at the 5A state tournament, scheduled for Oct. 1 and 3 at Liberty Park in Salt Lake City.

The Pioneers were represented by sophomore Caroline Moon in the No. 1 singles bracket. As the No. 5 seed, she started out by defeating No. 4 Emily Swapp of Mountain Ridge 6-3, 6-3 but then had to face top-ranked Avery Pope of Timpview, who won that match 6-1, 6-4.

Senior Aleea Symkoviak was seeded in the No. 4 position for the tournament and that was where she finished. She first swept No. 5 Sydni Kirkham of Mountain Ridge 6-0, 6-0 but then bowed to No. 1 Kayla Carlson of Orem 6-1, 6-0.

In first doubles, seniors Brynna Willardson and Jena Stanley were assigned the No. 7 seed and fell to No. 2 from Alta in the first round. They were paired with No. 6 Hannah and Esther Keen of Mountain View in the second match and rallied past them 7-6, 6-1.

However, the No. 4-seeded duo from Timpanogos, Taigely Parkinson and Elle Livingston, outlasted the Pioneer pair 6-3, 6-1 and went on to finish third.

In second doubles Lehi was seeded No. 5 with senior Makayla Colunga and sophomore Mylie McAllister. They lost to No. 4 Jane Callister and Eliza Bingham of Alta after a spirited effort 2-6, 6-7 in the first round and exited the tournament after falling to No. 2 Paige and Sidney Adams of Timpanogos 6-2, 6-2.

“This season has had many ups and downs,” said Coach Alan Wofford. “The first half of the season was very difficult for the girls because of so many lineup changes.

“When we went to St. George, we had a team meeting and the girls committed to work harder in practice and their matches. They were successful in that tournament and came home and won the rest of our matches.

“At the region tournament, many of them beat players they had lost to earlier,” Wofford continued. “Several coaches commented to me about how they had improved.”

Wofford added that the Pioneers haven’t had all of their singles players qualify for state in five years and the doubles matches were the most competitive in five years.

“I think that this team showed a huge amount of heart and trust in the coaches,” he said. “It’s an honor to coach them. I’m looking forward to seeing them compete in the state tournament.”