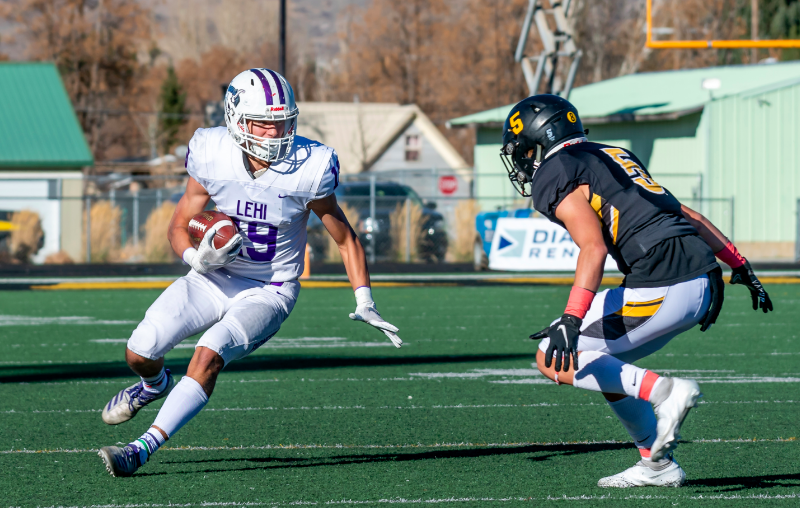 In the end, it came down to just one too many mistakes.

After a turnover-plagued first half and a shutout for three quarters, the No. 21 Lehi football team rallied in the fourth period and nearly pulled even but ran out of time to catch No. 5 Wasatch and the Wasps were relieved to collect a 26-19 victory on Oct. 30 and advance to the state tournament quarterfinals.

The season ended for the Pioneers with a 6-5 record, but three of those losses were by a single score and only one of them was a blowout.

Throughout the season, the team has relied on an energetic defensive effort, while the offense has looked shaky at times and performed brilliantly at others, which is a pretty good summary of what happened in the second-round tournament game in Heber.

Wasatch got the ball first but heard immediately from Lehi senior defensive tackle Tua Reed, who dropped the ball carrier at the 13-yard line. The Wasps didn’t get anywhere in this series and punted from near their goal line and the Pioneers took over just short of midfield.

Despite the first of several great plays in the contest from senior Isaiah Tauai, the drive stalled and the visitors turned the ball over on downs after an unsuccessful effort on 4th-and-2.

Wasatch moved quickly down the field, pushing the pace as they did all afternoon, and scored on a short touchdown run at the 7:08 mark of the first quarter.

The Wasps elected to take a short kick but Lehi snagged it at the 40. The Pioneers still couldn’t get a first down in three tries, but they faked a punt and senior running back Takeshi Faupula took a direct snap and ran for the first down and then some.

Unable to get much farther, Lehi gave up the ball again. However, the Pioneer defense didn’t budge and Wasatch had to give it right back. After Faupula made a big gain, the vaunted Wasp defense knocked the ball loose on the next play and the fumble was returned to the 1-yard line.

The defense stepped up one more time and held Wasatch out of the end zone, but a field goal pushed the advantage to 10-0 with 54 seconds left in the period.

In the second quarter, Lehi gave up interceptions at the goal line and in the end zone. The first led to a Wasp touchdown and the second ended a Pioneer drive to put points on the board before the end of the half. Wasatch earlier added a field goal to make it 20-0 before they headed to the locker room.

The Pioneers started with the ball in the second half but still couldn’t move it. The Wasps subsequently broke a big run to score again but the PAT was no good when the ball bounced off the top of the upright, so the lead advanced to 26-0 at the 6:30 mark.

It stayed that way for the balance of the third period.

When Lehi got the ball back early in the fourth quarter, they put it in the hands of sophomore quarterback Jackson Brousseau and turned senior Creyton Cooper into a wide receiver to good effect.

Brousseau, Cooper, senior Grady Gonzalez and Faupula combined to get the ball to the Wasatch 21-yard line. A pass interference call moved it to the 12 and Faupula finished the drive from there. The Pioneer attempt to go for the 2-point conversion was unsuccessful, leaving the score at 6-26 with 8:59 left.

The defense came through once more to force a punt and Lehi took over at midfield. Cooper was sacked but an unsportsmanlike call moved the ball to the 39 and Cooper broke loose to score from there with 6:13 remaining. The PAT was blocked but the visitors had some hope now with the score at 13-26.

The subsequent pooch kick was controlled by the Wasps but in their second series, they were held to just three yards and had to punt.

Three incomplete passes brought the Pioneers to a 4th-and-10 situation. Cooper was forced to scramble but he still managed to connect with Faupula for the first down at midfield.

On the very next play, Faupula found a hole opened for him on the left side and burst through to sprint to the end zone to make it 19-26 with 2:09 left to play. The PAT was again blocked but the advantage was still down to a single score.

Wasatch recovered the on-side kick but the Lehi defense held one more time on 4th-and -11 and the Pioneers got the ball back with 38 seconds to play.

A catch by junior Isaac Dailey and another big run from Faupula set up a final long pass attempt, but it was deflected in the end zone to close out the season for Lehi.