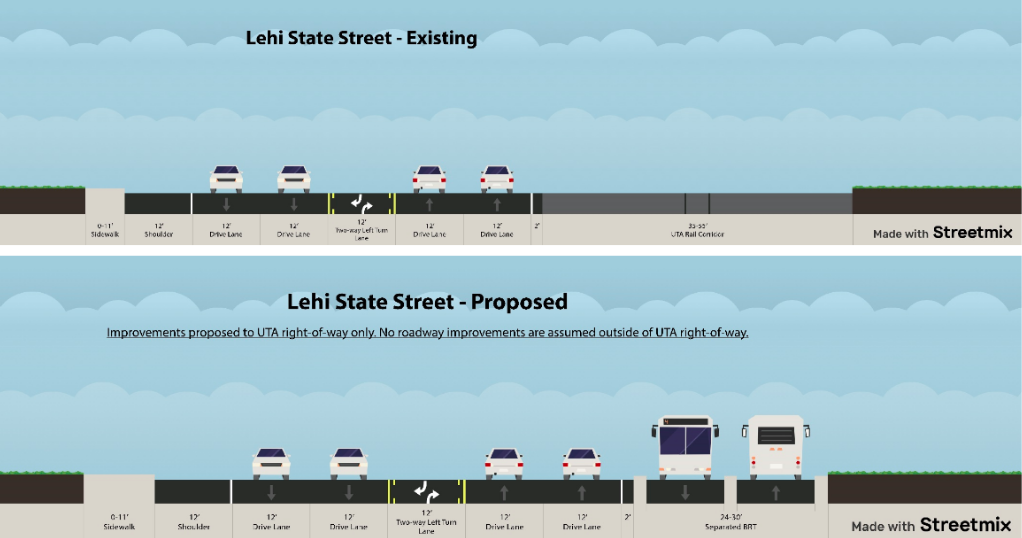 Is extensive public transportation coming to Lehi? On Tuesday, October 27, the City Council was presented an update on the Central Corridor Transit Study by Shane Marshall, Regional Transportation Director for Horrocks Engineering. The Utah Transportation Authority (UTA), Utah Department of Transportation (UDOT) and Mountainland Association of Governments (MAG) tasked Marshall and Horrocks Engineering to study a project that would provide reliable, frequent, high-capacity transit improvements between Lehi and Provo.

The study began in August of 2019. It proposes 25 miles of Bus Rapid Transit (BRT) with 30 stops from Lehi to Provo, similar to the Utah Valley Express (UVX) system completed in Orem Provo a few years ago. The BRT system would mostly use exclusive roadway lanes on State Street and a Vineyard branch-off connection from the Vineyard FrontRunner Station to State Street along 800 North.

Lehi station locations would include the following:

Marshall acknowledged several public concerns around the project and stated that the top issue they have heard at town halls was road lane usage.

“The number one concern we’ve heard is that people don’t want a reduction of capacity on State Street. That is not the intent. The plan is to maintain the existing lanes that are out there today,” said Marshall.

Marshall also said questions regarding funding were frequent but acknowledged funding is unknown at this time.

“If our project manager, Eric Rasband, were here, he would say to get this thing funded. There probably will have to be instituted a fifth quarter sales tax in Utah County,” said Marshall.

Councilwoman Paige Albrecht asked, “What is the overall public response so far?”

“What we hear often is, transit isn’t used today, so why are you building more? Replied Marshall.

Marshall followed up by saying that the current Provo and Orem UVX system gets an average of 12,000 boardings per day, calling it a success.

To conclude the agenda item, Councilwoman Katie Koivisto expressed her support for the project, saying, “I’m a proponent for public transportation, so this really excites me. If there is anything we can do to help to get this moving along or have these discussions, I really like it a lot.”

The project will now move into its next phase, including engineering refinements, funding strategies, operations planning, city zone changes and public open houses.