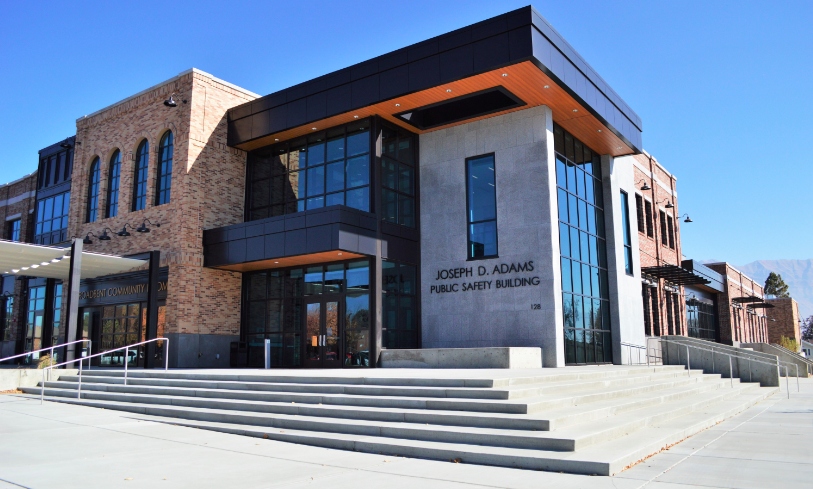 “We’ve watched the construction progress carefully. It’s helped ease our minds to see what a great job they’ve done,” said Bill Anderson, husband of Betty Broadbent Anderson. The Broadbent family store was a mainstay in Lehi for 135 years, and Betty was the last of the Broadbents to carry on the tradition. “A couple of times, Betty has asked me to go make sure the store is locked up,” chuckled Bill.

“I noticed today that the address is 128 North 100 East, just like the store. That was fun to see. I’m really happy. I’m honored,” said Betty Anderson.

Thad and Rosemary Adams also attended the ribbon-cutting for the building, which bears their son’s name. “We didn’t know what to expect when we found out the police building was moving from State Street,” said Thad Adams. “We never dreamed it would turn out so well. It is a living, active memorial to our son. I can’t tell you what that means to us. He will always be included in this department.”

“This was a once-in-a-lifetime project for us. We wanted to make sure it fit in Lehi, so we learned about Lehi’s history and especially Broadbent’s. There’s really nothing we would have done differently,” said Dallas Nelson, an architect from Curtis Miner Architecture. The Public Safety Building recently won the High Achievement Award from the Utah Chapter of the American Planning Association.

Lehi Police Chief Darren Paul and Mayor Mark Johnson cut a red ribbon in front of the Broadbent Community Room doors. Attendees received boxed lunches from Zupas and visited with four or five people at each table that could accommodate 12 people. The community room’s interior is lined with bricks saved from the original Broadbent’s store, and there is an engraved plaque on the wall detailing the store’s history.

“I caught a glimpse of this building as I was driving down Main Street the other day. There is a view of just the second-floor windows at about Center Street, and it looks like the old Broadbent’s. That is just really cool,” said City Councilmember Mike Southwick.

“This turned out so beautiful. What a compliment to the city and the community,” said former Lehi City Mayor Bert Wilson. “I’m blown away – it has far exceeded my expectations.” Wilson and former members of the City Council began the process for the new Public Safety Building more than a decade ago