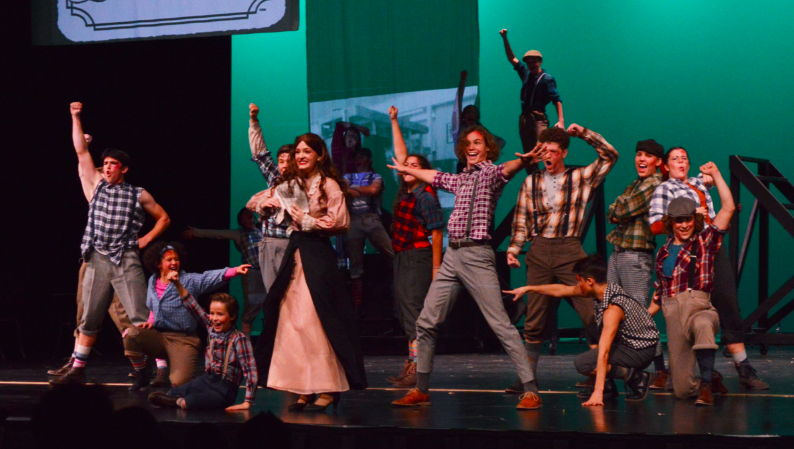 For months, the cast and crew of Lehi High School’s production of “Newsies” have carefully followed every protocol and have made minor and major adjustments to perform on the new auditorium stage for a live audience. They made it to opening night, Friday, Dec. 4, without postponing or cancelling the show because of COVID-19 restrictions, and the 25% capacity crowd that sounded closer to 100% capacity, was treated to a high-energy, genuinely joyful performance by the talented cast.

“There was a lot of uncertainty with this show because of COVID. We were always worried it wouldn’t happen. Just rehearsing was a great experience, but I’m so happy we got to do it in front of a live audience,” said LHS senior Maddy Ehat, Katherine Plummer/Pulitzer in “Newsies.”

The new auditorium at Lehi High School is much bigger and more high-tech than the beloved old stage, but many of the traditional LHS touches were included. Director Mindy Nelson utilized every bit of the stage as well as the aisles and wings, with actors singing and dancing all around the audience. “Newsies” didn’t feature Randy Blackburn’s iconic set pieces as in recent years, but old-time photos of New York were projected on screens onstage and off-stage to create the effect of actors on the street or inside an office building dozens of floors up.

“Newsies” tells the story of the real-life newsboy strike in 1899 in New York City. When Joseph Pulitzer, publisher of the New York World newspaper, raises the price for newsboys who buy and sell the papers, 17-year-old Jack Kelly organizes a union and convinces the other newsboys, all children, to strike. Other child laborers join the strike and bring the city’s workforce to a standstill. The kids win and Pulitzer gives in to their demands.

The ensemble numbers “The World Will Know,” “Seize the Day” and “Once and For All” were outstanding, every voice strong and clear despite the demanding choreography. Ehat as Katherine has a moving solo, “Watch What Happens” that earned long, appreciative applause. Tyler Garcia is perfectly cast as Jack Kelly, giving a charismatic and charming performance.

To comply with pandemic restrictions, cast members wore masks when they weren’t onstage. “Those who wore pants could keep their masks in pockets, but a few of us who wore dresses hid them in shorts under our skirts,” said Ehat. Occasionally the audience could see masked actors in the wings and once Beck McAdams, playing young Les, walked on stage with his mask still around his ears. The main characters Katherine and Jack were supposed to have three kisses onstage, but no matter how much begging Nelson did, she was told “absolutely not,” to real kissing during the pandemic. The spotlight was turned off for the big romantic moments and Ehat and Garcia got whoops and whistles from the audience for the pretend kisses.

“It was such a miracle and so amazing to be able to perform onstage after such a long time. The old stage had such great energy and we really wanted to bring that to our first production on the new one,” said Ehat.

For the audience, seeing the uncontrollable smiles of all the beautiful cast members was also a miracle.