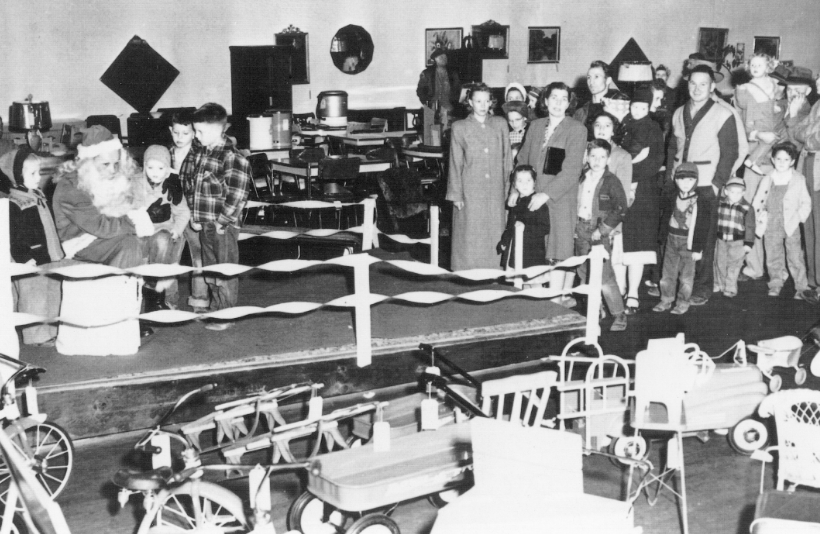 On December 6, 1956, the Lehi Free Press announced that a Gift-o-Rama would be held to help promote shopping in local businesses. “A free ticket will be given with each one-dollar purchase made at one of the sponsoring business houses,” it read, “and the climax of the Gift-o-Rama will take place Dec. 22, when the prizes will be given away [through at raffle] at the bank parking lot.”

Each of the 18 participating Lehi businesses donated an “individual store prize.” Grand prizes included an automatic washer, a television set, and a bicycle, which were on display at the State Bank of Lehi at 99 W. Main. Shoppers had two weeks to make their purchases and get as many tickets as they could.

On Dec. 22, a large crowd gathered in the parking lot of the bank on Main Street. The excitement in the crowd grew as each ticket was pulled out of the barrel, and the winner’s name was called. Prizes ranged from Christmas turkeys and hams to electric irons and bun warmers.

The Gift-o-Rama was a great success and became an annual event for around 40 years. The drawings were held on several Saturdays during the month of December and were usually in the bank parking lot, although some were on State Street and other locations.

Over the years, the prizes varied from hi-fi stereos to a Shetland pony. Most of Lehi’s older residents can remember standing in the cold and feeling the excitement of the crowd eagerly waiting for their name to be called—no matter what the prize was.

The Gift-o-Rama promoted community spirit and helped the local economy by encouraging the citizens to buy from local businesses.